Boris Johnson Bows Out of Presser With European Leader...Who Proceeds to Rip Him 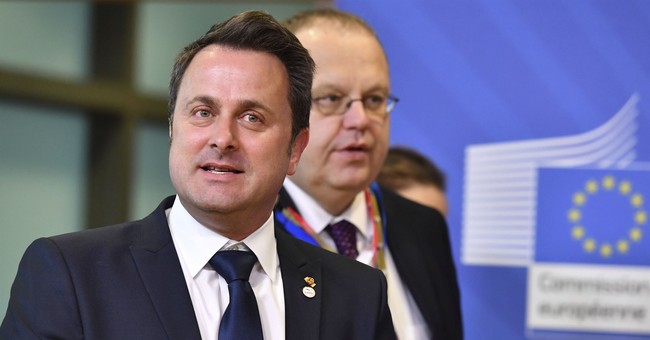 Want another glimpse into how the Brexit process is going? Here's a hint: British Prime Minister Boris Johnson was due to appear at a press conference with Luxembourg Prime Minister Xavier Bettel on Monday after a meeting with European Union leaders. But he bowed out after a group of anti-Brexit protesters heckled him.

Bettel took advantage of his solo presser and ripped Johnson for trying to put the Brexit blame on the EU.

As Bettel sees it, the UK Conservative Party, who organized the referendum back in June 2016, did not organize an accurate information campaign, despite knowing the risks of Brexit.

Luxembourg PM Xavier Bettel says “some people would love to give the blame to another” over #Brexit, as Boris Johnson pulls out of a press conference over protestshttps://t.co/M3fYrDlBfa pic.twitter.com/TEbOHzi5UP

It is, at its core, a "homemade problem," Bettel reminded the press.

"We did not decide to organize that Brexit," he said. "It was a unilateral decision of the UK government."

So, don't start making the EU out to be "the bad guy," he added.

Bettel insists that the only real solution to Brexit is the current agreement that has been trashed by Johnson because it includes the Irish backstop. It's a controversial feature, to be sure. But Bettel claims there are no other concrete proposals at the moment.

Bettel also criticized Johnson for describing his plan to get the UK out of the EU as the Incredible Hulk smashing through a wall. This, Bettel noted, is "too serious" a time to be talking about comic book characters.

Johnson insists the UK will honor Brexit on October 31. Deal or no deal. The European Parliament will debate the issue once more on Wednesday.

Sure, that will help to cork the chaos!