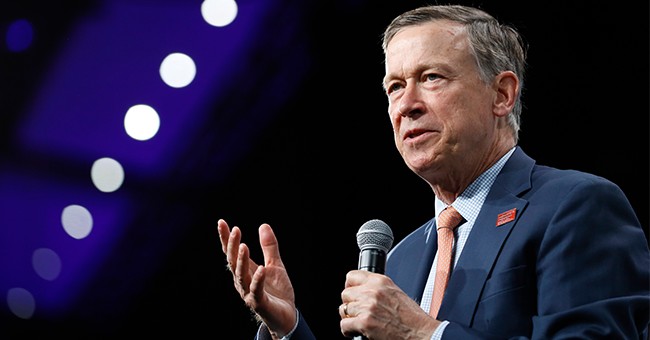 Update: Apparently Colorado Democrats don't want anything to do with him either!

Well, that's the end of the road for presidential candidate John Hicklenlooper. But it's just the beginning for Senate candidate John Hickenlooper. The former Colorado governor gave it his best shot but never exceeded an average of 1 percent national support in his 2020 campaign. The press repeatedly asked him why he was running for the White House and not the Senate, where he could be much more influential, but he insisted Congress wasn't for him.

“I’m not cut out to be a senator,” Hickenlooper said in February. “Senators don’t build teams. Senators sit and debate in small groups, which is important, right? But I’m not sure that’s my — I’m a doer. That’s what gives me joy.”

He still held that sentiment in May, telling MSNBC's Rachel Maddow that he's the person who "can bring people together and really get done the big, progressive things that people say can't get done."

On Thursday, Hickenlooper officially declared he had changed his mind.

I’ve always said Washington is a lousy place for a guy like me who knows how to get things done. But this is no time to walk away. Changing DC is hard, but I’m not done fighting for the people of Colorado. I'm running for U.S. Senate. Join us: https://t.co/v7THnZZ9aB #COSen pic.twitter.com/iiQXOUrRhJ

The National Republican Senate Committee had a field day with it.

“John Hickenlooper is desperate to redeem himself after flopping on the national stage, but we think he said it best just a few months ago: he is ‘not cut out’ for the Senate,'" NRSC spokesperson Joanna Rodriguez said in a statement on Thursday. "This crowded Senate field has been in a race to the left and Hickenlooper’s quixotic presidential bid did not do him any favors in proving he can compete in any race in 2020.”

Washington Gov. Jay Inslee also announced that he's withdrawing from the White House race during his appearance on Maddow's show last night. But he's still going to be fighting climate change, his No. 1 issue.

That makes three candidates who have now called it quits. But there are still plenty where they came from.