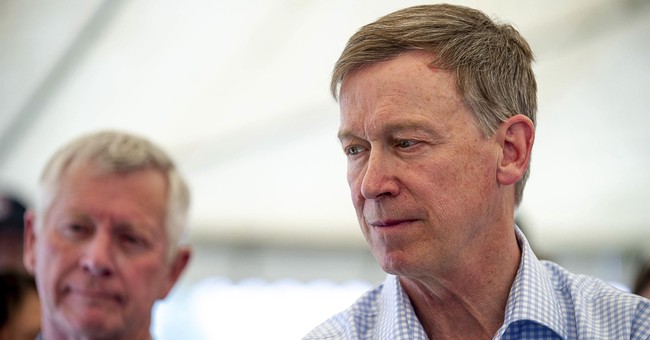 With dozens of Democrats in the 2020 race, it's hard to keep up with the gaffes. But we are doing our best. The latest embarrassing media hit is courtesy of former Colorado Gov. John Hickenlooper. MSNBC's Rachel Maddow invited him on her show Thursday night to discuss his campaign platform. She seemed more interested, however, to know why he was running for president and not for the Senate. Practically speaking, he'd have a much better chance at victory and could help Democrats reclaim the upper chamber.

"Pragmatically, I wish you were running for the Senate," Maddow told her guest candidly. "You are the candidate who could most easily take a Republican Senate seat in Colorado."

Hickenlooper laughed and said he understood, but his mind had been made.

Fmr. Colorado Gov. Hickenlooper, when asked by @maddow about why he's running for president instead of for the Senate:

"I'm that person that can bring people together and really get done the big, progressive things that people say can't get done," he reasoned.

He can't do that in the Senate?

He dismissed Maddow's idea and mused that she's "obviously been talking to Chuck Schumer."

Well, it's probably not just Schumer. Plenty of Democrats are wondering why Hickenlooper would join a field of 20 plus candidates for the long shot chance of getting the nomination and beating President Trump. He doesn't have the name recognition others like Joe Biden have, so what exactly is his game plan?