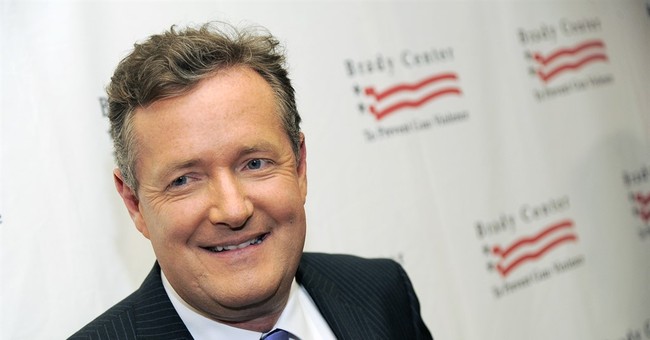 "Good Morning Britain" host Piers Morgan has a message for his fellow liberals: You're "unbearable."

"Populism is rising because liberals have become unbearable, and I speak as a liberal, okay?" Morgan said this week.

Morgan shocked viewers recently by agreeing to another debate with his old sparring partner, conservative commentator Ben Shapiro. The two had some nasty tête-à-têtes a few years ago over gun control when Morgan hosted a show on CNN. In one discussion on the tragic shooting at Sandy Hook Elementary in 2012, Shapiro even looked straight in Morgan's face and accused him of "standing on the graves" of the murdered children.

That made this photo rather jarring.

But, one thing the two men do appear to agree on is the danger of today's PC culture. Morgan may not like the rise in populism, he said, but he can understand how we got here.

He then teed up the perfect question: "What’s the point of calling yourself a liberal if you don’t allow anyone else to have a different view?"

When did @piersmorgan become so woke? pic.twitter.com/SaYmAMsA2g

“The liberals get what they want, which is a humorless void where nothing happens, where no one dared do anything or laugh about anything or behave in any way that doesn’t suit their rigid way of leading a life,” Morgan continued. “No thanks.”

By way of example Morgan mentioned comedian Kevin Hart, whose decades old tweets about homosexuality cost him his Oscars hosting gig this year. If we keep up these character examinations, Morgan predicted that not only will we have no more hosts, we'll have no more awards to hand out. Because we're all flawed.

The liberal host has surprised conservatives in recent years with some of his hot takes. In January, Morgan sounded off on a new Gillette ad that challenged traditional masculinity. He dismissed the ad as "PC guff."