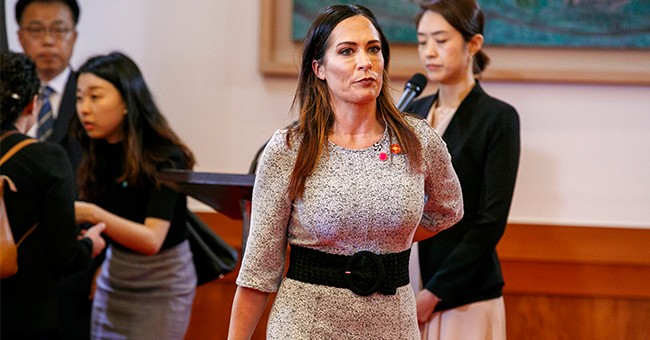 New White House Press Secretary Stephanie Grisham wasted no time in going to bat for President Trump on Wednesday night in her first television interview since taking over the role. She kind of had to because the previous guest, Anthony Scaramucci, had just spent an entire segment questioning the president's mental health and called him "nuts."

She also doesn't buy that the Mooch has several other people who are planning to "turn" on the president.

"He can't name one," Grisham noted.

Scaramucci lasted only 10 days as Trump's communications director in 2017. He had held some fiery press briefings in which he pushed back at specific reporters and defended Trump profusely. But it was his loose-lipped interview with the New Yorker, in which he profanely insulted former White House staffers Steve Bannon and Reince Priebus, that cost him his job. Scaramucci had continued to speak highly of Trump in the media until last week when things got ugly.

For the last 3 years I have fully supported this President. Recently he has said things that divide the country in a way that is unacceptable. So I didn’t pass the 100% litmus test. Eventually he turns on everyone and soon it will be you and then the entire country. https://t.co/BUvwujc6LW

Grisham previously served as first lady Melania Trump's press secretary. She took over as White House press secretary following Sarah Huckabee Sanders's resignation in June. Sanders is by far the longest serving Trump communications head as of yet, having kept the role for just under two years. There have not been any White House press briefings since Sanders's departure, and according to Grisham, they won't revisit them any time soon.

“The president is his best spokesperson,” she said. “He is the most accessible president in modern history, so I don’t know what any of the press could complain about.”