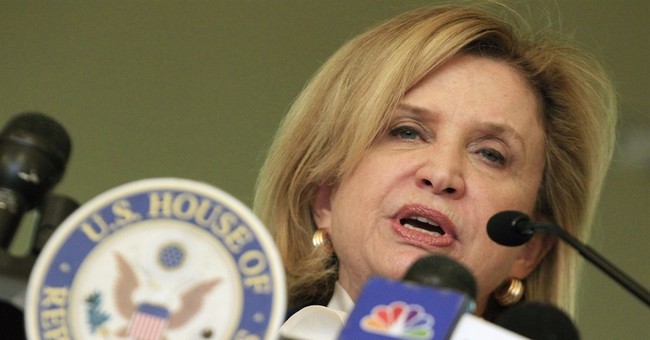 President Trump signed a measure to replenish the September 11 Victims Compensation Fund on Monday. Congress voted to reauthorize the fund last week after months of emotional hearings and pleas from the very heroes who benefit from it.

"Today, we come together as one nation to support our September 11th heroes, to care for their families, and to renew our eternal vow: Never, ever forget," Trump said in the Rose Garden ahead of the signing.

The media couldn't help noticing there were some empty seats in the audience.

Not a single Democrat expected at the 9/11 compensation fund signing ceremony at the White House, per poker ?@fran_chambers? pic.twitter.com/ysjnvBNoNg

Some Democrats defended themselves and said there was a valid reason they weren't there. The office of Rep. Carolyn Maloney, who authored the bill, claims she wasn't even invited.

"Rep. Carolyn Maloney (D-N.Y.) was the lead author of the 9/11 fund bill," The Daily Beast reported. "But a spokesperson for her office confirmed to The Daily Beast that she was not invited to the event."

That's not true, according to the White House.

Follow up … A White House source tells me every member of Congress was invited to the bill signing ceremony. Invites were sent Saturday morning, as @seungminkim has already pointed out. https://t.co/6WTTtlYDrO

Other Democratic sources acknowledged the invitations, but said they already had commitments.

Schumer did get a White House invite to 9/11 event, received 12:25 a.m. on July 27, per office. He has previous commitment in upstate New York. Have yet to hear back from Gillibrand's folks. https://t.co/vQLBYYUXot

Some social media users noted this was not a fair criticism, considering it was Democrats who urged for the restoration of the fund in the first place.

This is what is politely called “redefining the narrative”. aka rewriting history and claiming credit for what is not theirs. Democrat @RepJerryNadler was among the the first to recognize an issue with 9/11 responders while Republicans fought appropriate care all the way. https://t.co/0eKNd14eUl

also not present are the top members who pushed for this legislation...
* Rep. Carolyn Maloney (who literally wore a firefighters jacket for months until the bill passed.)
* Schumer / Gillibrand / Cory Gardner of Colorado
read @juliehdavis for bg > https://t.co/ShFbPwZ3aF https://t.co/6ouqYz80Dh

Comedian Jon Stewart also deserves kudos for getting this done. He was on the front lines for these first responders for some time and was instrumental in moving Congress to act. When it came time to vote, it was nearly unanimous - a tally of 97-2. Sens. Mike Lee (R-UT) and Rand Paul (R-KY) voted "no" because they were concerned about the cost.

Since the September 11, 2001 terror attacks, over 2,000 first responders and survivors to 9/11-related cancers and illnesses have died, the president reminded us on Monday. Thousands more are battling illness today.