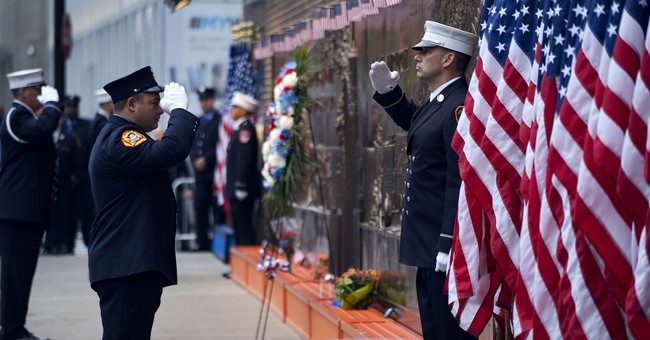 UPDATE: All members of Congress were invited to the signing event. Not a single Democrat showed up.

President Trump signed the 9/11 victims compensation fund on Monday morning during an event in the Rose Garden. His signature makes the fund permanent.

"Today, we come together as one nation to support our September 11th heroes, to care for their families, and to renew our eternal vow: Never, ever forget," President Trump said. "Since September 11th, we have lost more than 2,000 first responders and survivors to 9/11-related cancers and illnesses.  Currently, thousands of men and women are battling cancer and other illnesses due to 9/11.  We pledge to stand by the families of those affected, today and every day.  We will stand with you."

"I want to thank lawmakers in both parties for working with common purpose to pass this vital and critical legislation," he continued.

The signing came after months of debate on Capitol Hill over proper funding for the legislation. Republican Senators Mike Lee and Rand Paul voted against making the fund permanent due to a lack of offsets for the cost.

As I have done on countless issues, including disaster relief and wall funding, I will always take a stand against borrowing more money to pay for programs rather than setting priorities and cutting waste.

From The Salt Lake Tribune:

Lee and Paul had outraged first responders and their advocates after they held up a final vote on the fund that has broad bipartisan support. Lee had objected to the idea of greenlighting the extension for the next 73 years as written into the legislation and argued that more oversight was needed.

“It’s only right for Congress to reauthorize and replenish the fund so that we can make those beneficiaries whole,” he said, but Congress has a duty to make sure there is oversight of the program and not just write a blank check for 73 years.

His amendment, he said, “would make sure that the money gets to the victims and the first responders who need it most, to the intended beneficiaries rather than remaining vulnerable to the kind of waste, fraud, and abuse that comes about whenever we authorize something until 2092 with” an unlimited sum of money.