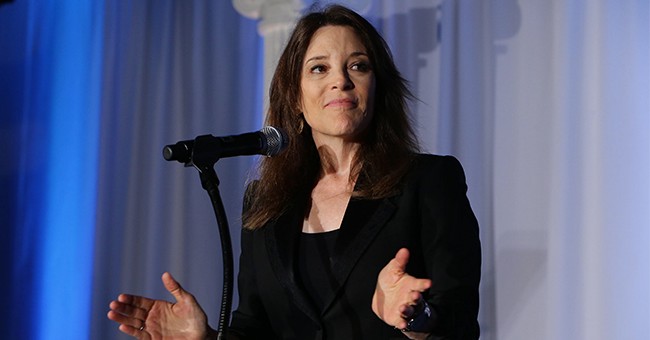 Democratic presidential contender, author, and spiritual advisor Marianne Williamson was aghast to find that Vogue had invited some of the 2020 female candidates to partake in a photo shoot and she had not been invited.

New in Vogue: A story by @amychozick about the women lawmakers running in 2020 for president.

As you can see, Sens. Elizabeth Warren (D-MA), Kamala Harris (D-CA), Kirsten Gillibrand (D-NY), Amy Klobuchar (D-MN), and Rep. Tulsi Gabbard (D-HI) were all present and accounted for, but Williamson was MIA.

Vogue tried to explain itself by noting the magazine was only featuring female candidates with political experience. That didn't go over well either.

.@marwilliamson reacts to the Vogue photo shoot about the women running for president. The photo shoot she wasn't included in. "It's very insidious and subtle. It's a suggestion that only those who have elected office in their past are qualified." pic.twitter.com/BgVNZQ2hft

"It's very insidious and subtle," Williamson told CNN's Kate Boduan. "It's a suggestion that only those who have elected office in their past are qualified."

So, Williamson took matters into her own photoshopping hands on Instagram. And voila! The masterpiece is complete.

.@voguemagazine excludes @marwilliamson. @Frances_Fisher posts the Vogue photo with Williamson on the outside looking in. Williamson responds by putting herself in the photo on the wall, suggesting she's the real winner and the others are pretenders. Well done — epic. pic.twitter.com/sDOVnAGFFJ

"The framers of the Constitution did not make Vogue magazine the gate keepers of America’s political process, here to determine who and who is not to be considered a serious political candidate," Williamson defiantly said in an earlier Instagram caption.