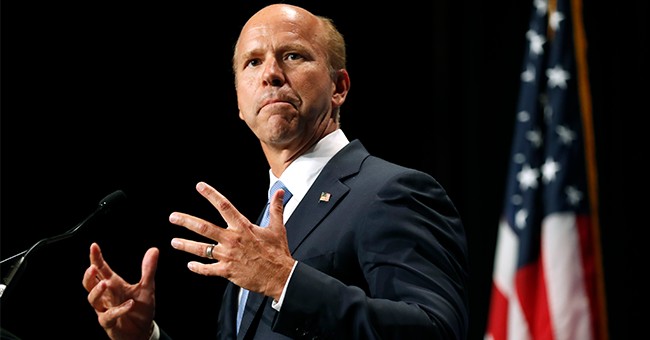 Hugh Hewitt kicked off his radio show on Friday by thanking his guest, former Maryland Congressman John Delaney, for "saving his blue cross." His health care.

Unlike some of his leftist opponents, Delaney does not endorse the Medicare for All plan, which would kick 250 million Americans off of their private insurance plans and give government the reins.

"The American people want choices," Delaney protested. "And they ought to have them. It's also about economics, as you know."

Other moderates agree. Delaney's fellow presidential contender Sen. Michael Bennet (D-CO) was able to tell Sanders face-to-face last night at the 2020 Democratic primary debate in Miami that he, the state of Vermont, and others have "rejected" Medicare for All. Bennet's plan would retain the parts of Obamacare that worked, and fix the parts that failed.

JD: I know. It kind of takes your breath away a little bit, doesn’t it?

HH: Well, does anyone in your party understand that’s not tenable? That’s 150% of the national debt.

JD: Right, listen, I don’t think, that’s a detail that a lot of people don’t focus on. You know, as I said the other night, we have to be the party that has workable solutions. We’ve got to tell people how we’re going to pay for them. And then we have to tell people how we’re going to get it done politically, right? That should be our jobs. And you know, what’s different about me is for everything I’ve proposed, I explain why it’s workable. People can disagree, but I have an opinion as to why it’s workable. I tell people how I’m going to pay for it. And I lay out how I think I can get it done politically, which as you know is incredibly hard for any of this stuff.

HH: As the framers intended it to be.

As Hewitt noted, it almost makes sense. But Delaney and his more moderate plan for health care, which he's termed "BetterCare," were booed off the stage at this month's California Democratic Party's convention.

Again though, what does it say about the state of politics today when endorsing Obamacare is considered a moderate Democratic position?

You can learn more about Delaney and his policy positions here. If you're interested in a recap of last night's contest in Miami, that can also be arranged.