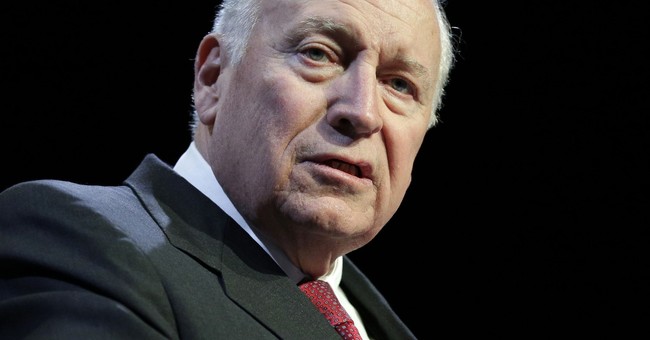 At a recent private retreat with the American Enterprise Institute, former Vice President Dick Cheney criticized Vice President Mike Pence face-to-face for a string of recent foreign policy decisions. In particular, Cheney shared his concerns about the troop withdrawal from Syria, and how Trump is treating our NATO allies. Cheney insisted that the Trump administration is causing our friends to lose confidence in us and even told Pence that their foreign policy is on par with Obama's, according to the Washington Post.

“I worry that the bottom line of that kind of an approach is we have an administration that looks a lot more like Barack Obama than Ronald Reagan,” he said.

That last charge is what got Donald Trump Jr. into the debate. He defended his dad's VP on Twitter Tuesday morning.

Isn't it fitting that Cheney is the one mad that Trump is ending his reckless and endless wars? I never knew peace would be so unpopular!

Trump Jr. isn't the only one to have questioned Cheney's hawkish agenda. Republican strategist and former Trump White House assistant Andrew Surabian is among many others who charge that the former VP's foreign policy decisions single handedly "tore apart" the Middle East.

Cheney and his foreign policy decisions were also the subject of last year's award-winning movie Vice. Bale's Golden Globe-winning, yet unflattering portrayal of Cheney treated him as a war hungry hawk who had little regard for consequences. The actor was not exactly fond of the character he played, calling Cheney "Satan" in his acceptance speech.

Not a popular guy these days.