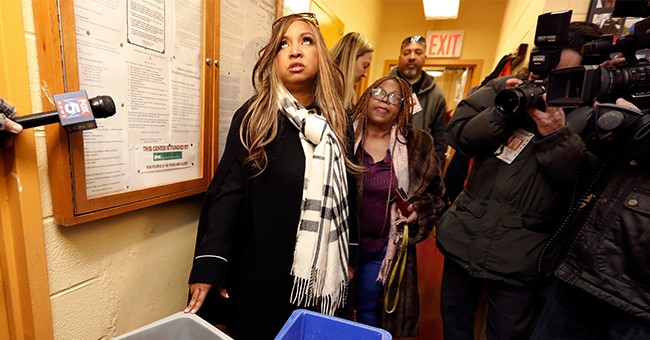 “She says that as a daughter of a man born in Birmingham, Alabama, that there is no way that she would work for an individual who was racist,” Meadows explained of Patton.

Patton also defended herself and the president against Tlaib's accusations, first on her Instagram. In a lengthy post, she highlighted her credentials to prove she did not have the resume of a "prop."

Today a race card was played. But not by Congressman Mark Meadows. But rather by those on the House Oversight Committee who sadly placed more credence on the word of a self-confessed convicted perjurer, than that of a highly-educated black woman who rose up the ranks of one of the most recognized global real-estate companies in the world, spoke before 25 million people at the Republican National Convention and now successfully oversees the largest HUD program office in the country. That is not the resume of a prop. It is, however, the resume of someone who remains completely unfazed by the criticism of others and laser focused. Today was simply about one longtime employee disputing the testimony of another longtime employee who both know the President extremely well. Period. Since the release of my viral video in May 2015, those who know me can confirm that my steadfast narrative about the Trump family has not changed. The only one of us whose narrative has changed is the one facing significant jail time. Period. My presence today was to remind Michael Cohen that honesty and integrity still matter. I do not have an NDA. I do not have a book deal. What I DO have is the truth on my side. And when you have that, nothing else matters. ????

Patton sounded off again during an appearance on "Fox & Friends" Thursday morning.

CNN couldn't quite find the audio of Patton's response for Tlaib when the latter appeared on the network Thursday morning, so here it is.

Patton wonders why the freshman lawmaker is giving more credence to a witness who is a known liar and in a few months will be a prisoner.

"What I'd like to ask the congresswoman from Michigan is, why does she take the word of a self-confessed perjurer and criminally convicted white man over a black female who's highly educated, rose up through the ranks of one of the most competitive companies in real estate, spoke before 25 million people at the Republican National Convention and now works in one of the most historic administrations in history?"