President Trump Signed a New Directive for the Space Force. It's Slightly Different From His Original Plan. 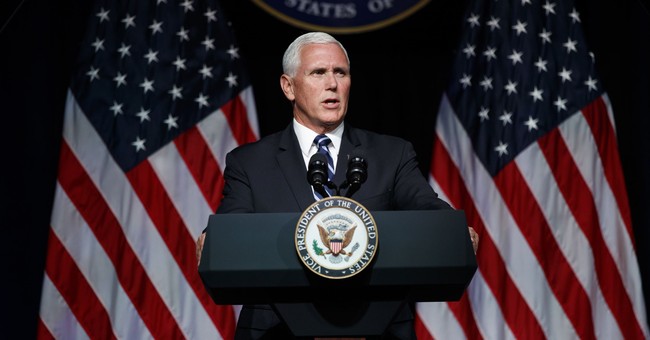 President Trump signed the Space Policy Directive 4 on Tuesday to try and get his Space Force off the ground flying. The measure would create the Space Force as an armed service within the Air Force, a slightly different approach than his original plan. When Trump first announced the creation of the force last June, he said the space program would be "separate but equal" from the Air Force. Tuesday's directive would place the Space Force under the umbrella of the Air Force, but turning it into the 6th branch of the armed services is still Trump's long-term goal.

"America must be fully equipped to defend our vital interests," Trump said in the Oval Office on Tuesday shortly after the signing ceremony. "Our adversaries are training forces and developing technology to undermine our security in space."

Vice President Mike Pence, who's been a leading figure on the space program, couldn't agree more. The administration is adamant that America display its dominance in space.

Fox News anchor Kevin Corke explained what the early Space Force will look like by comparing it to another branch of the military.

#NEW @realDonaldTrump will sign a policy directive to establish the #SpaceForce at 2pm today, which would place the new #SpaceForce under Air Force. This means the #SpaceForce would be to the #AirForce what the #Marines are to the #Navy.

But it's not ready for liftoff just yet. The directive requires the approval of Congress. Pence has indicated the administration wants to see the official Space Force established by 2020.

If all goes to plan, the Space Force will be the first new branch of the military since the Air Force was founded in 1947.

Who Killed Ashli Babbitt
Townhall
Seuss Enterprises threatens to sue The Babylon Bee over satirical article on the Cat In The Hat and puberty blockers
Twitchy
Conservative Women Are the Happiest People in America: Any Guesses Who's Unhappiest?
Redstate
Dr. Fauci Does Damage Control on Sunday Show Circuit After Getting Torched by Jim Jordan
PJ Media