Jon Meacham Got to Read His Eulogy to President Bush Before He Died. Here's How He Responded. 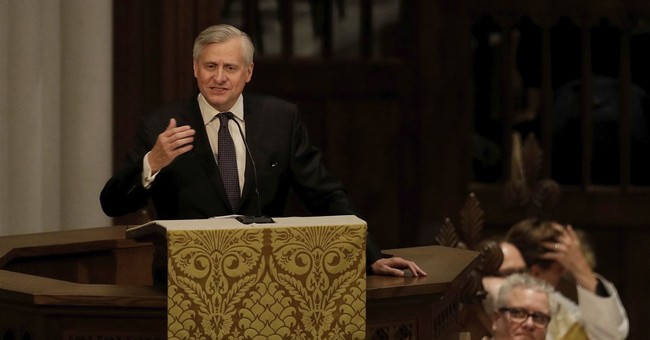 Presidential historian and biographer Jon Meacham gave the very first eulogy at Wednesday's state funeral for President George H. W. Bush. It was a beautiful tribute, with just the right amount of humor:

Jon Meacham: "As Dana Carvey said, the key to a #Bush41 impersonation is Mister Rogers trying to be John Wayne."#Remembering41? pic.twitter.com/yuaWJLlMmA

"For Lincoln and Bush, both called on us to choose the right over the convenient, to hope rather than to fear, and to heed not our worst impulses, but our best instincts." https://t.co/gDtd8AhlRU pic.twitter.com/2Yi0sTvaos

Americans can be comforted to know that 41 got to hear these words himself. Meacham revealed to NBC's Willie Geist after the memorial service that he read his eulogy to the president before he passed. Bush's response was not at all surprising to those who know his character.

With the memorial service finished, @JMeacham has given me permission to report that he had the chance to read that beautiful eulogy to President Bush before his death.

After hearing his own eulogy, President Bush said, characteristically: “That’s a lot about me, Jon.” #Bush41

Bush's humility was one common denominator in today's eulogies. Each speaker spoke highly of Bush, who was often hesitant to speak highly of himself. However, as President George W. Bush recalled during his eulogy, his father was quick to raise up others.

"He looked for the good of each person, and he usually found it."