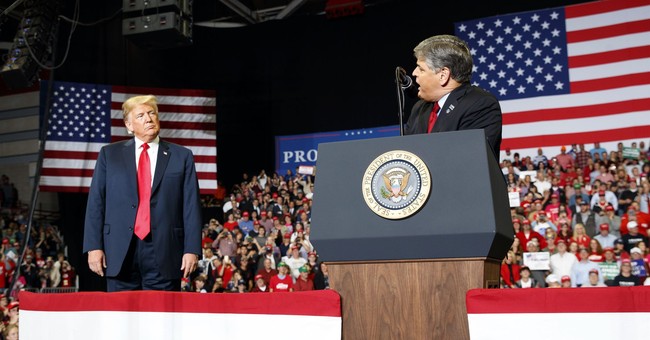 President Trump caught Fox News host Sean Hannity off guard when he invited him onstage at his midterm election rally over the weekend in Missouri. He had "no idea" Trump was going to do that, Hannity said. Yet, when he complied with the president's wishes and stepped up to the podium, Hannity delighted the crowd by calling out the "fake news" media. Critics, including CNN, were outraged at Fox for letting its hosts apparently campaign with the president and Republican candidates. Fox News's Jeanine Pirro also jumped onstage.

“I mean, when people say that there’s no difference and when Fox tries to consider itself a news organization, they have some complications at moments like this," CNN anchor Alisyn Camerota mused.

“FOX News does not condone any talent participating in campaign events," the network noted. "We have an extraordinary team of journalists helming our coverage tonight and we are extremely proud of their work. This was an unfortunate distraction and has been addressed.”

When Hannity was nowhere to be seen on Fox Tuesday night during 24/7 midterm coverage, viewers were concerned. Did the Trump controversy have something to do with it? Hannity returned Wednesday night and told his audience to relax - he "never" works on election night.

He then took the opportunity to clear the air about the Trump event. Echoing what he said on Twitter, the host said he was always "100% truthful" about his presence at the rally.

“We did this event with Donald Trump the other day in Cape Girardeau, Missouri, and I tweeted out I was not part of whatever coverage was going to take place at the campaign. I gave a tweet that was 100% truthful. I was watching Rush give his speech. The President––I had no idea. He invited me on stage. I’ll be honest, I was honored by the president’s request. It was not planned. And I want to be very, very clear. I’m on stage. You know, you’ve heard me say it all the time, every day, every night, because I believe it’s true, that there’s a lot of fake news. I want to be very clear, especially after hearing some commentary and reading some things. I was not and would never refer to my friends, my colleagues here at the Fox News Channel in those remarks. As a matter of fact, they are such a cut above everybody else. If anybody construed it that way, I am totally sorry in terms of the people that I work with.”

Hannity acknowledged that some of his Fox News colleagues, "have one really tough job, because they have to stay fair and balanced and they do that in an amazing way every day.”