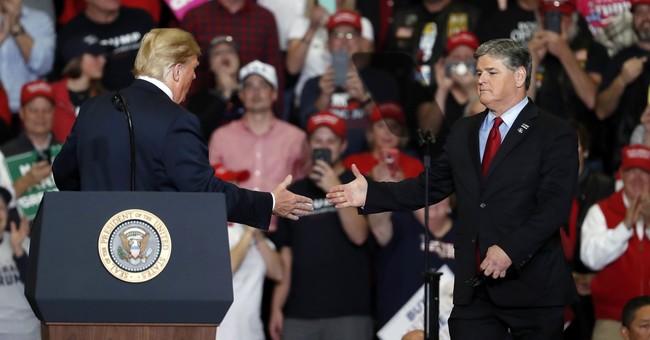 “FOX News does not condone any talent participating in campaign events. We have an extraordinary team of journalists helming our coverage tonight and we are extremely proud of their work. This was an unfortunate distraction and has been addressed.”

UPDATE: Hannity defends his onstage appearance at the Trump rally.

What I said in my tweet yesterday was 100% truthful. When the POTUS invited me on stage to give a few remarks last night, I was surprised, yet honored by the president’s request. This was NOT planned.

Fox News hosts Sean Hannity and Jeanine Pirro were guests at President Trump's rally in Missouri Monday night for Republican Senate candidate Josh Hawley. When Hannity took the stage, he delighted the crowd by calling the reporters in the back of the room "fake news."

It was especially surprising because earlier in the day Hannity said he would not be campaigning with the president, CNN noted.

Trump called Pirro to join him onstage too, and she in turn encouraged the room full of Trump supporters to channel their energy into voting.

"If you like the America" that Trump is making, she said, "you’ve got to make sure you get out there tomorrow if you haven’t voted yet."

“They know, vaguely, that they’re not supposed to have one of their hosts endorse a candidate or a party,” CNN anchor Alisyn Camerota said. “But Sean Hannity can't help himself.”

"They’re having a schizophrenic moment over there trying to figure out what their role over there is supposed to be with the Trump presidency,” she added.

Camerota went on to pose a hypothetical, suggesting that if her fellow anchor Don Lemon had joined one of the Democrats at a campaign rally, he would not have emerged unscathed.

"Can you imagine Don Lemon campaigning for Stacey Abrams?” Camerota asked. “Don Lemon being able to take the podium?”

“I mean, when people say that there’s no difference and when Fox tries to consider itself a news organization, they have some complications at moments like this.”

Following the campaign event, Hannity said he had "no idea" the president was going to call him onstage.