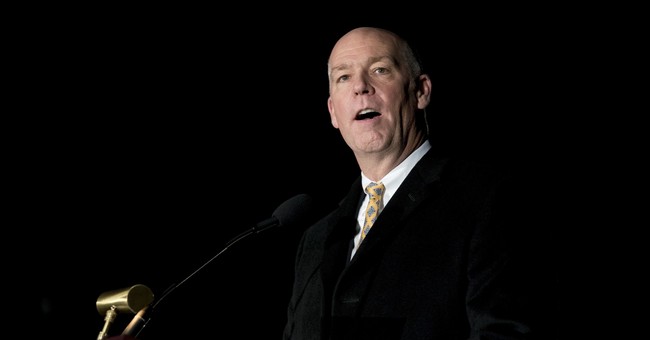 Rep. Greg Gianforte (R-MT) is infamous for "body slamming" Ben Jacobs, a reporter from The Guardian who apparently asked one too many questions a day before last year's special election to replace Ryan Zinke, now the Secretary of the Interior. President Trump recently applauded Gianforte for the incident at a campaign rally, joking that the body slam probably "helped" his chances in Montana. But, a good many more condemned the lawmaker for engaging in violence against a journalist.

At the time, Gianforte pleaded guilty to misdemeanor assault, donated $50,000 to the Committee to Protect Journalists, and Jacobs had agreed not to sue him.

But, Jacobs is now threatening to break that settlement agreement, accusing Gianforte of intentionally misleading voters and the media about the attack. Last week, Gianforte told the Missoulian editorial board that he initially told the police the truth about the incident. In fact, according to a police report, he told them Jacobs started the physical altercation.

“Rep. Gianforte’s continued lying this month has greatly aggravated the severe harm that Rep. Gianforte previously caused to Ben and Ben's reputation," the letter states, according to a copy obtained by Politico. "The continued lying is unacceptable and actionable. Please advise your client that he and his spokespersons need to stop -- immediately and forever -- telling lies about the assault, about their own prior lies, about your client’s ‘settlement agreement’ with Ben, or about any other aspect of this matter.

As expected, Gianforte's Democratic challenger Kathleen Williams's campaign is replaying the audio of the body slam incident every chance they can get in their ads. Gianforte is currently leading by an average of 7 points.