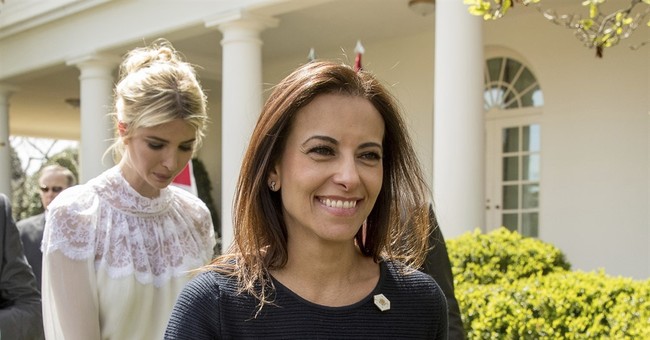 Nikki Haley is leaving her post as U.S. ambassador to the United Nations with a lengthy list of accomplishments. She's helped rein in Iranian aggression, moved progress on a denuclearized North Korea, assured Israel we have her back, and overall just gained the U.S. more respect on the international stage. She was by all means a class act.

She became a conservative hero for delivering powerful speeches defending America's interests. One of her most memorable speeches is when she told the other member nations that the U.S. was "taking names" on those who refused to stand with them.

Now that she's leaving the high profile post, rumors are swirling over her successor. Here are a few names that are gaining traction.

Dina Powell, a former Goldman Sachs executive who served in the Bush White House and State Department, and later as Trump's Deputy National Security Advisor, was one of the first names to be uttered as the next possible UN ambassador. In the Trump White House, she worked closely with Ivanka Trump in the areas of entrepreneurship, economic growth and the empowerment of women

Not that this is proof of anything but Haley did just go boating with Powell.

Introducing sweet friends to one of our favorite places....?????? #ItsAGreatDayInSouthCarolina ?? pic.twitter.com/ZNygye9MaK

Then there's Richard Grenell, the current ambassador to Germany. He already has eight years of experience of working at the UN.

John Bolton. The current national security advisor had the title of U.S. ambassador to the UN once before. Could he be itching for the post again?

Why not Ivanka Trump? CNN's Jim Sciutto noted Tuesday that it was already unprecedented" for the president to appoint his daughter as a senior adviser. Why not continue the trend at the UN? "Anything's possible," CNN senior political analyst Mark Preston agreed. In her resignation announcement, Haley praised Ivanka and her husband Jared Kushner for their efforts behind the scenes.

In her brief White House press conference with President Trump, Haley said it was her "honor" to have defended America. She said there were no personal reasons for her departure, she just knew it was "time to step aside." And no, she's not running in 2020.

Trump said he expects to name outgoing ambassador Haley's replacement in the next "two or three weeks."