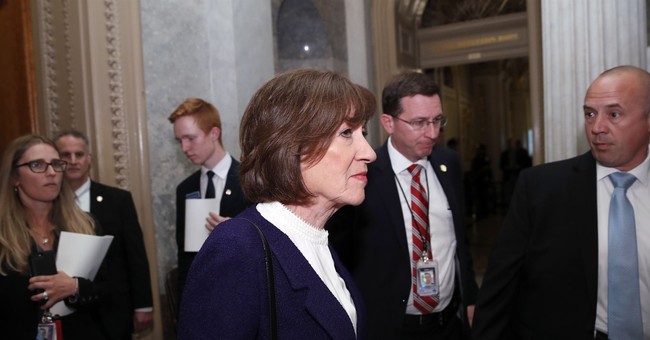 Since voting "yes" on new Supreme Court Justice Brett Kavanaugh, Sen. Susan Collins (R-ME) has been condemned, threatened, and harassed repeatedly. The Women's March even called her a "rape apologist" for believing Kavanaugh over his accuser, Dr. Christine Blasey Ford.

Twitter users wanted to "punch" her in the face. One even wished death on her. The disturbing message apparently wasn't enough to be removed by Twitter, but multiple users flagged the FBI and the Secret Service.

I hope someone kills you.

Others suggested Collins will never have another quiet day in her life.

"This is as ugly a situation as I have ever seen,” Collins said in response to all the attacks. Anti-Kavanaugh forces were simply trying to "buy votes," she said.

She also hit back at Planned Parenthood for accusing her of siding with people who "mocked survivors." Just last year the group honored her for fighting for their funding.

She pointed out the group's hypocrisy.

“I would note that Planned Parenthood opposed three pro-choice justices just because they were nominated by Republican presidents: David Souter, Sandra Day O’Connor and Justice Kennedy,” Collins noted. “They said the same thing, women will die. This is just outrageous.”

In her speech ahead of the vote, Collins explained that the bullies' tactics backfired. In fact, they convinced her more than ever to vote in favor of Trump's nominee.

Since that time, we have seen special interest groups whip their followers into a frenzy by spreading misrepresentations and outright falsehoods about Judge Kavanaugh’s judicial record. Over-the-top rhetoric and distortions of his record and testimony at his first hearing produced short-lived headlines which, although debunked hours later, continue to live on and be spread through social media. Interest groups have also spent an unprecedented amount of dark money opposing this nomination.

The process, she bemoaned, had officially hit "rock bottom."

The bullying wasn't the only reason she supported Kavanaugh, though. Collins met with the nominee on multiple occasions and felt assured that he respected the precedent of Roe v. Wade. Abortion rights have been an important issue for her, and she told press after meeting with him that he told her the case is "settled law." Instead of dismissing him as soon as Trump nominated as leading Democrats did, she explained that she reviewed his 12 years on the D.C. Circuit Court of Appeals, including his hundreds of opinions, speeches and law review articles to reach her conclusion.

It doesn't matter, though. Her vote has sullied her reputation.

This is the new standard. Someone doesn't vote the way you want, so they deserve to be harassed in public.