Susan Collins Requests Monday's Hearing Be Treated Like a Trial 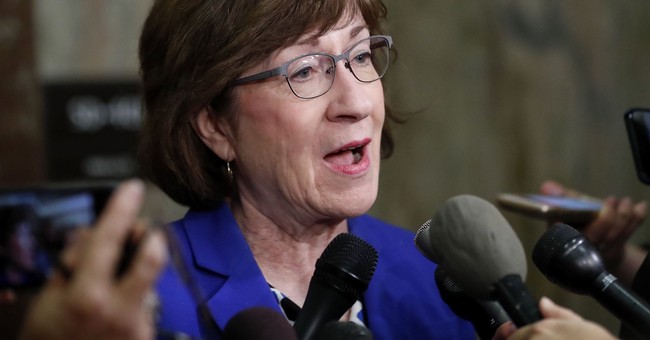 Supreme Court nominee Brett Kavanaugh's accuser Christine Blasey Ford has charged the nominee with sexually abusing her in high school. She will testify before the Senate Judiciary Committee on Monday. Now, Sen. Susan Collins (R-ME) is calling for Kavanaugh's lawyer and his accuser's lawyer to have some courtroom-like time at the hearing.

Such an approach would provide more continuity, elicit the most information & allow an in-depth examination of the allegations.

Collins has often been hailed by many on the left as a moderate and even a champion of women, especially because she voted against the GOP led effort to repeal Obamacare. But, she is out of their good graces after how she's handled Kavanaugh's nomination. Liberal groups in Maine say she should not even think twice about voting against him because he would overturn Roe v. Wade. They even asked people to donate to her opponent. She probably angered those groups even more by questioning Ford's behavior. It's "very puzzling," for instance, why the accuser did not answer Chairman Chuck Grassley's calls about testifying.

“That’s very puzzling to me," Collins said. "I have said from the beginning that these are very serious allegations and she deserves to be heard. She’s now being given an opportunity to come before the Senate Judiciary Committee and to answer questions and I really hope that she doesn’t pass up that opportunity.”

During her last phone call with Kavanaugh, the nominee "emphatically denied" the sexual assault charges, she told reporters.

However, Collins has also said that if it turns out Kavanaugh is lying, that's disqualifying.