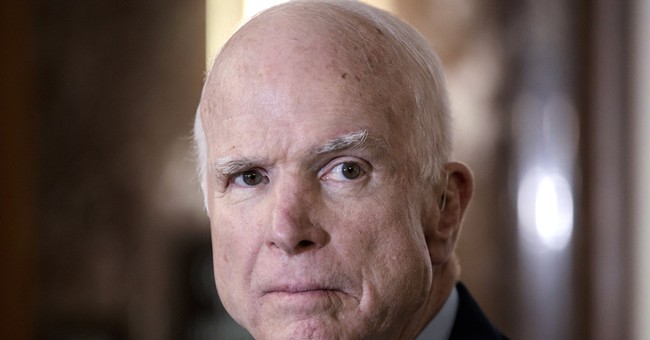 Sen. John McCain's (R-AZ) family announced Friday that the senator is discontinuing medical treatment for his aggressive form of brain cancer. His daughter Meghan shared the news on Twitter.

My family is deeply appreciative of all the love and generosity you have shown us during this past year. Thank you for all your continued support and prayers. We could not have made it this far without you - you've given us strength to carry on. pic.twitter.com/KuAQSASoa7

Sen. McCain, 81, spent six years as a POW during the Vietnam War. He has served as Arizona's senator for six terms.

McCain's colleagues and friends - both Republican and Democrat - have begun to send their thoughts and prayers to him and his family.

Praying for my courageous colleague @SenJohnMcCain and his family. https://t.co/N162eGjp8K

One of the true honors of my life has been having @SenJohnMcCain as a friend & mentor. He’s a true American hero. His courage & indomitable spirit have inspired millions in America & across the globe. I humbly ask all Americans to pray for him & his loving family. Semper Fi John.

No man this century better exemplifies honor, patriotism, service,
sacrifice, and country first than Senator John McCain. His heroism
inspires, his life shapes our character. I am blessed and humbled by
our friendship.