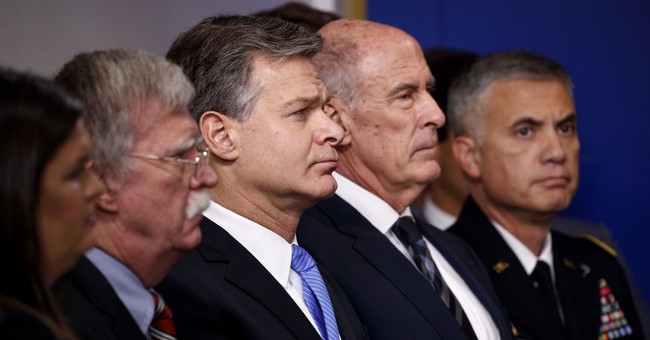 On Thursday, a group of national security officials stepped up to the White House briefing room podium to announce their coordinated effort to combat the Russians' election interference campaign. Some praised their show of force, but others, like former CIA Counterterrorism Official Phil Mudd, say it was all a "PR stunt."

“That was not a security meeting,” Mudd said. “That was the White House using a bunch of people so for the next two months they can use a talking point that said, ‘hey, anytime somebody raises Russia to Sarah Sanders, she’s going to say look the president directed those guys and women at the podium to do something about it.”

CNN anchor David Gregory pushed back a bit, noting that "these are still responsible people," who even if they reacted out of pressure, "still came and briefed people about where they see the threat and what the government is doing about it."

Participating in Thursday's briefing were Homeland Security Secretary Kirstjen Nielsen, Director of National Intelligence Dan Coats, national security adviser John Bolton, FBI Director Christopher Wray, and NSA director Gen. Paul Nakasone. They all seemed to be on the same page. Russia had absolutely interfered in our elections, they noted, before sharing what each of their agencies were doing about it.

The DHS is working with all 50 states to boost election infrastructure, the FBI is engaged in information and intelligence sharing and establishing strong relationships with the private sector to help technology companies monitor their platforms, the officials shared.