Over a Dozen States Suing Trump to Reunite Families 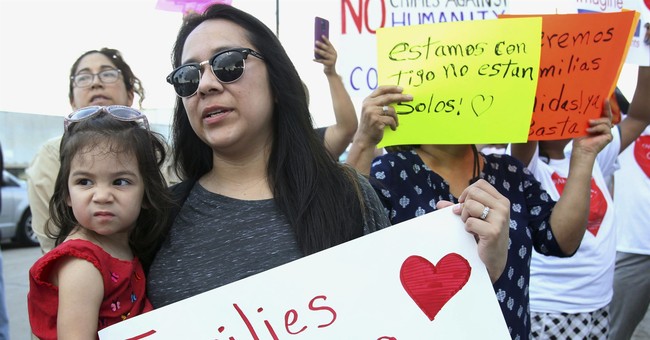 Seventeen states are suing President Trump in an attempt to reunite families at the U.S.-Mexico border before Trump signed an executive order to end the practice of family separation. The White House's zero tolerance policy required authorities to prosecute adults, placing children in detention centers in the interim.

All states suing Trump are led by Democratic attorneys general. It marks the first legal challenge to the White House over its family separation process.

“The administration’s practice of separating families is cruel, plain and simple,” New Jersey Attorney General Gurbir Grewal said in an emailed statement provided to the Associated Press. “Every day, it seems like the administration is issuing new, contradictory policies and relying on new, contradictory justifications. But we can’t forget: the lives of real people hang in the balance.”

Critics called the White House's zero tolerance position cruel and shared photos of children crying after being taken from their parents, demanding Trump overturn the policy. He signed executive action to stop the separation of families, but it did not require the reunification of families who had already been separated. First Lady Melania Trump visited a detention center in Texas last week to commend authorities for taking care of children there and showing so much compassion. She supports family reunification and was reportedly an influence on the president's decision to sign the executive order.

Massachusetts, California, Delaware, Iowa, Illinois, Maryland, Minnesota, New Jersey, New Mexico, New York, North Carolina, Oregon, Pennsylvania, Rhode Island, Vermont, Virginia and Washington are all listed on the lawsuit. Meanwhile, a San Diego judge is considering whether to issue a nationwide injunction that would order Trump to reunite the families after a lawsuit was filed by the American Civil Liberties Union.