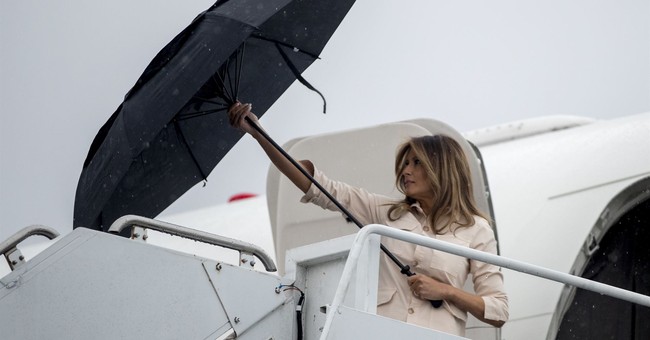 First Lady Melania Trump made a surprise visit to a Texas detention center Thursday. Shortly after her arrival and tour, she sat down with officials who updated her on the conditions of the facility.

She was engaged and asked questions throughout their discussion, thanking the representatives at the table for treating the immigrant children who have been separated from their families with "kindness" and "compassion." She hoped she could help them reunite the kids with their loved ones as soon as possible.

"Thank you so much for having me here today... I'm here to learn about your facility."

Mrs. Trump said she is eager to meet with the children at the facility as well.

The surprise touchdown in Texas was "100 percent" the First Lady's idea, according to Stephanie Grisham, the first lady's communications director.

"She wanted to see everything for herself," Grisham said. "She supports family reunification. She thinks that it's important that children stay with their families."

Mrs. Trump was reportedly an influence in her husband's decision to sign executive action to keep families together during border processing.

President Trump commended Melania for making the trip. She is down now at the border "because it really bothered her to be looking at this and to seeing it, as it bothered me, as it bothered everybody at this table," he said at the White House. "We're all bothered by it."