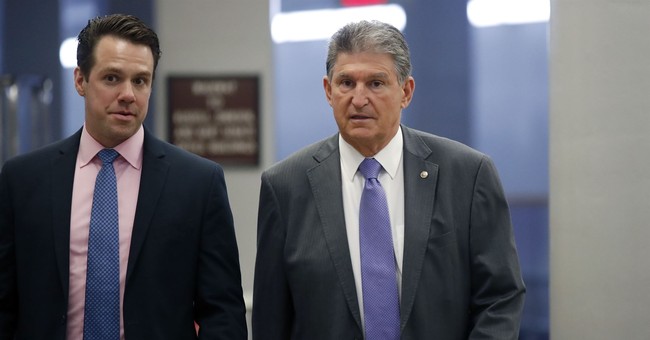 Sen. Joe Manchin (D-WV), one of the vulnerable Democratic senators running for re-election in a red state, is fully embracing the Trump agenda, you'd be led to believe if you read Politico today.

Trump has publicly criticized Manchin in recent months, but the senator insists the two get along fine.

"We just kind of do the man-bump type thing," Manchin said of the president's teasing. "That’s it. And I think he’s pulling me as much as I’m pulling him.”

Donald Trump, Jr. doesn't believe the bromance for a second.

Still, not only does Manchin claim to embrace Trump, but he added that he regrets his prior support of Hillary Clinton, particularly in light of her unfortunate comments about putting the coal industry out of business.

In an interview during a drive across his state’s Eastern Panhandle, Manchin revealed that he repeatedly threatened to revoke his support for Clinton after she remarked, in March 2016, that she planned “to put a lot of coal miners and coal companies out of business.” First, Manchin told Bill Clinton that he would withdraw his support, as the former president pleaded with him not to. Then Hillary Clinton called him.

“She said, ‘Please don’t. Let me come to West Virginia, I need to explain.’ I said, ‘That’s a bad idea, you shouldn’t come,’” Manchin recounted.

Other vulnerable Democrats like Sen. Claire McCaskill (D-MO) have tried to distance themselves from the Cilntons. In March, McCaskill chided Hillary for her dismissive comments about Americans who live where "there's all that red in the middle" of the country.

"For those of us that are in states that Trump won we would really appreciate if she would be more careful and show respect to every American voter and not just the ones who voted for her," McCaskill said.

Oh, now he’s open to it?!? What changed in 24 hours? The old DC tell them what they want to hear routine is not working anymore Joe. No one is buying it just look at your record. Time for some new blood. Vote @MorriseyWV #wv #wvpol https://t.co/3zSwofaTwg