Report: The Sexual Assault at Michigan State University Did Not End With Nassar 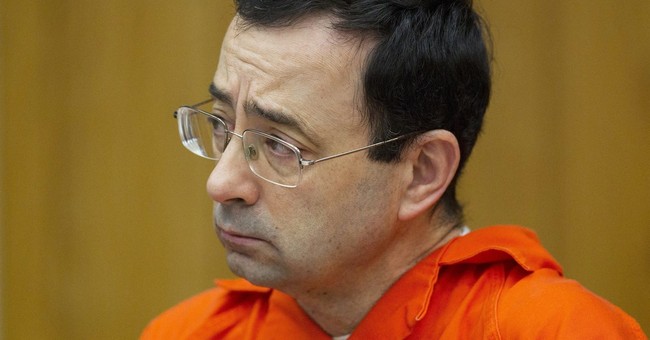 Disgraced and convicted U.S. Gymnastics doctor Larry Nassar will be behind bars for the rest of his life. He was given 275 years for sexually assaulting nearly 200 of his female patients, among them Olympic medal winning gymnasts Aly Raisman, McKayla Maroney, Simone Biles, Gabrielle Douglas and Jordyn Wieber. Those world renowned athletes were among the dozens of witnesses to bravely tell their horror stories in court in January.

Nassar's sentencing was not enough for some of his victims. There was a failure among Michigan State University, USA Gymnastics and United States Olympic Committee for letting Nassar continue his reign of terror for so long and their lack of accountability is "disgusting," Raisman said, demanding change.

She got a partial victory after the entire USA Gymnastics board announced their resignations.

Strampel, who supervised the clinic that employed Nassar, also allegedly groped a woman and solicited nude photos from at least one student, according to the affidavit obtained and first reported by the Detroit Free Press. It alleges Strampel used his office to “harass, discriminate, demean, sexually proposition, and sexually assault female students in violation of his statutory duty as a public officer.” (The Daily Beast)

The MSU investigation also found that Strampel failed to properly addresses the sexual assault charges against Nassar, keeping him on the payroll for two years.

Strampel has been arrested by Michigan Police. He is faced with charges of felony misconduct, fourth-degree criminal sexual  conduct and two other misdemeanors.

More justice needs to be served.