Another Bombing Reported in Austin, This One With a 'Different Characteristic' 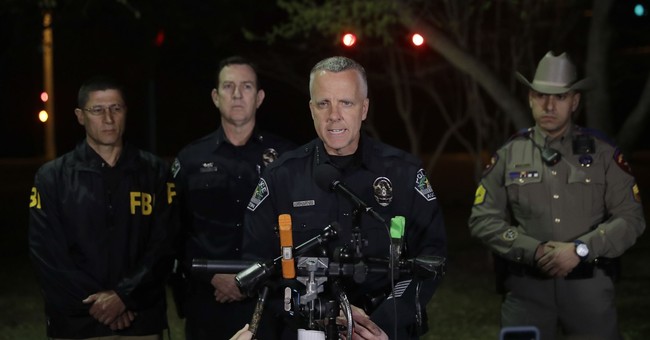 UPDATE: Austin Police Chief Brian Manley updated the community Monday, asking individuals in the area that if they have video surveillance on their homes, to provide the police that footage. He noted that after a preliminary review, they have seen "similarities" between the device that exploded Sunday and the other three incidents.

Another bombing has been reported in Austin, Texas. This time, a "trip wire" appears to have triggered the explosion, injuring two people. It is the fourth bombing in Austin in the past few weeks. The first three were hidden in packages delivered to individuals' doorsteps. Two people were killed and two others injured in that trio of explosions.

Austin Police Chief Brian Manley said although this latest explosion was set with a "different characteristic," they are treating it as though it is related to the other three.

"There was a description that we may be dealing with a tripwire on this explosive and so out of an abundance of caution we've locked the neighborhood down to keep everybody safe and we're going to go in at sun up this morning and begin processing the post-blast scene," Manley told "ABC World News Tonight" anchor David Muir. (ABC News)

Austin Mayor Steve Adler told CNN Monday that the warning to the community is now "broader" than before, considering this latest bombing was triggered under different circumstances. The community is still urged to report suspicious packages, but they must be extra vigilant. The reward for any tips has been increased to $100,000.