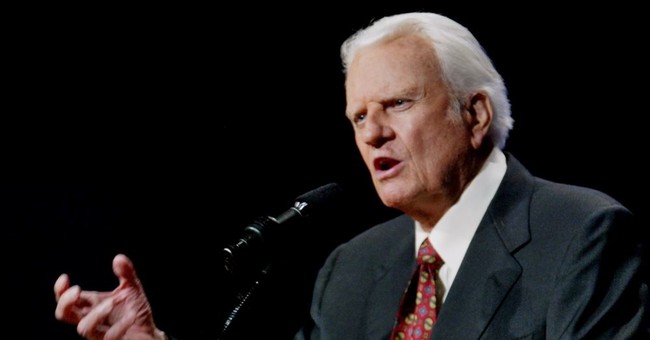 The late evangelist Billy Graham will lie in honor at the Capitol Rotunda in Washington, D.C. this week, an honor few civilians have been given. Yet, because this spiritual leader was such a force for faith in his many years of preaching, citizens will be able to pay their respects.

The pine plywood coffin Graham is being laid in was made by inmates at the Louisiana State Penitentiary back in 2006. It had been the wish of his son Franklin Graham.

Yesterday my father’s body was brought from the funeral home to the @BillyGraham Training Center at @TheCoveNC. His simple plywood casket, like my mother’s, was built by convicted murderers at Angola Prison. 1/2 pic.twitter.com/7tAvzfqEHA

Graham explained that he wanted his dad buried in this simple looking casket ever since he saw one during a speaking gig at the Louisiana prison. He learned that inmates, many of whom had converted to Christianity, had built them because many of them could not afford to be buried in them otherwise.

The plain wooden caskets caught Franklin Graham’s eye during a 2005 preaching engagement at Angola. That’s when he saw the inmates hard at work crafting them, and he soon learned why. The initiative began when then-warden Burl Cain discovered many of the poorer inmates were being buried in cardboard boxes.

As a result, Cain had the inmates construct plywood caskets for themselves and others who couldn’t afford one. In addition to making the caskets, the prisoners—many of them former hardened criminals who are now committed Christians—also pray over them.

Franklin Graham was struck by the simple and natural beauty of these caskets and requested the prisoners design and build two of them for his parents. Billy and Ruth Grahams’ caskets were built by inmate Richard “Grasshopper” Liggett, with the help of others. Their names are burned into the wood. (Billy Graham Evangelistic Association)

Graham reached millions of people with his Christian crusades, and has offered spiritual counseling to every president since Harry Truman.

Graham's casket will lie in honor at the Capitol rotunda on Wednesday, Feb. 28, and Thursday, March 1. Among those paying their respects to Graham next week will be former President George W. Bush and First Lady Laura Bush.

Graham's funeral will take place at noon on March 2 at the Billy Graham Library in Charlotte, N.C.