Despite Political Differences, Bobsledder Manages to Have Fun Meeting Ivanka at Olympics 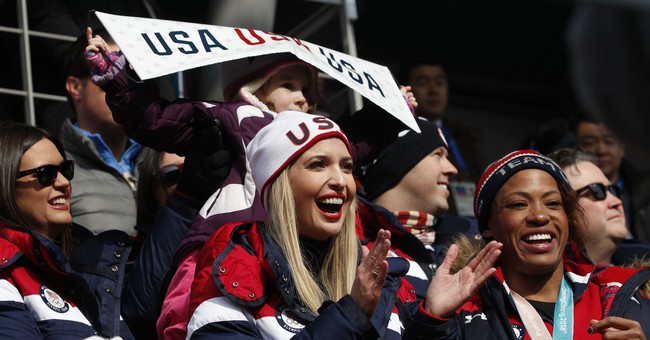 Lauren Gibbs, a brakeman for the U.S. women's bobsled team at this month's Pyeongchang Olympic Winter Games, proved Sunday that not everything has to be consumed by political ideologies. She, along with several other athletes, were greeted by First Daughter Ivanka Trump and White House Press Secretary Sarah Huckabee Sanders ahead of the Games' closing ceremony. There were no protests or chants, just goodwill and a fun selfie session.

While she may differ politically from her new friends, their meeting was all smiles.

At one point, Gibbs even let Ivanka try on her silver medal, which she won with her bobsled partner Elana Meyers Taylor last week.

Figure skater Adam Rippon's Olympic experience, meanwhile, seemed to be nothing but politics. Rippon, who is openly gay, infamously criticized Vice President Mike Pence for his traditional views on marriage. Asked if he'd meet with him at the Games, Rippon declined and said it would be against everything he believes in.

Despite his very public remarks about the VP, Rippon said he didn't want his Olympics to be all about Mike Pence.

Another openly gay Olympian, Gus Kenworthy, told the press he would refuse to go to the Trump White House if invited. Oh, and he had this classy remark for the First Daughter when she arrived in Pyeongchang for the closing celebration.

So proud of all these people! Everybody here has worked so hard to make it to the Olympics and have the opportunity to walk in the closing ceremony! Well... Everyone except Ivanka. Honestly, tf is she doing here?? pic.twitter.com/sfJKi0VTDb

Political drama aside, the U.S. managed to amass 23 medals, coming in fourth place among the competing nations.