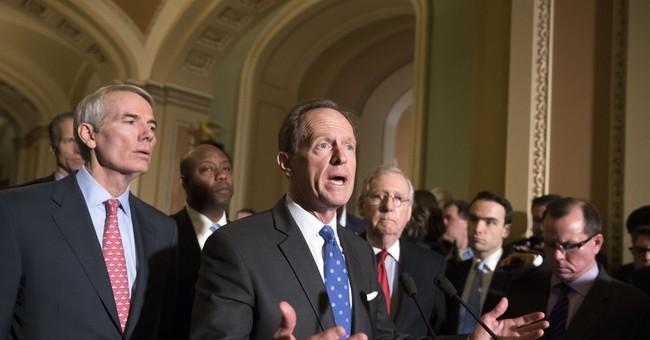 Is impeachment an option for Pennsylvania state supreme court justices after their decision to redraw the state's congressional map? It at least deserves a "conversation," Sen. Pat Toomey (R-PA) suggested Wednesday.

Republicans like Toomey are frustrated over the state supreme court's ruling to redraw Pennsylvania's 18 districts. By all accounts, the new map favors their opponents. It changes certain districts into the Clinton friendly column, while turning others into "safe Democrat." Right now, Republicans hold 13 of the House seats, but the new maps are sure to affect the midterm elections.

The state supreme court overstepped its authority, some Republican lawmakers claim. That's why Toomey raised the impeachment debate at a press conference Wednesday.

"Look, I think it's inevitable that that conversation's going to take place," Toomey said. "I think state House members and state senators are going to be speaking amongst themselves and their constituents, and the fundamental question is does this blatant, unconstitutional, partisan power grab that undermines our electoral process, does that rise to the level of impeachment?" (The Hill)

Impeachment may not be on the table yet, but lawsuits certainly are. Republicans are taking their grievances to federal court and President Trump is right behind them.

Hope Republicans in the Great State of Pennsylvania challenge the new “pushed” Congressional Map, all the way to the Supreme Court, if necessary. Your Original was correct! Don’t let the Dems take elections away from you so that they can raise taxes & waste money!