More Warning Signs: Florida Suspect Reportedly Once Wrote He Wanted to Be a 'Professional School Shooter' 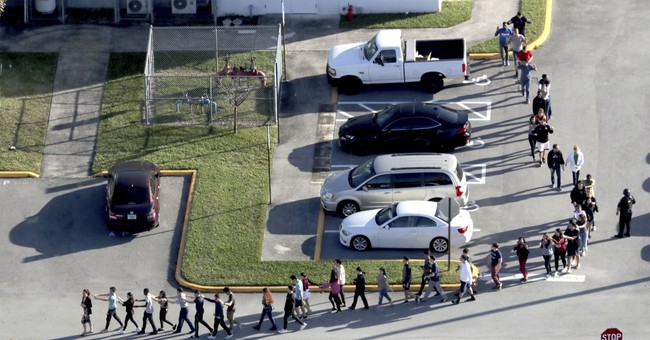 One surviving student at Marjory Stoneman Douglas High School, where 17 people were killed in a mass shooting, told the media that "everyone predicted this."

It's quickly coming to light what exactly he meant.

A former student, 19-year-old Nikolas Cruz, opened fire on Marjory Stoneman Douglas High School in Parkland, Florida Wednesday. He's now in custody, but it's too little too late. We're learning that he was known to authorities for his pattern of disturbing behavior.

One teacher told The Miami Herald that Cruz had been flagged as a potential threat to students in the recent past. We then learned from Broward County Sheriff Scott Israel that Cruz had once been expelled for "disciplinary reasons."

The FBI reportedly knew about him too. Last September, a YouTube user alerted the agency that someone named Nikolas Cruz had left an eerie message on one of his videos.

Last fall, a Mississippi bail bondsman and frequent YouTube vlogger noticed an alarming comment left on one of his videos. "I'm going to be a professional school shooter," said a user named Nikolas Cruz.

The YouTuber, 36-year-old Ben Bennight, alerted the FBI, emailing a screenshot of the comment to the bureau's tips account as well as calling the Mississippi FBI field office. He also flagged the comment to YouTube, which removed it from the video. (BuzzFeed)

The FBI followed up with Bennight in an interview and took a copy of the screenshot, and that was that, he told BuzzFeed News.

"They took a copy of the screenshot and that was the last I heard from them," he said.

Cruz used an AR-15 and was also equipped with smoke grenades and wearing a gas mask when he opened fire on the school.

President Trump tweeted his condolences, but added that citizens must be more vigilant about reporting suspicious behavior.

So many signs that the Florida shooter was mentally disturbed, even expelled from school for bad and erratic behavior. Neighbors and classmates knew he was a big problem. Must always report such instances to authorities, again and again!

Authorities are expected to update the media on the situation Thursday morning at 10:15 a.m. ET, and Trump will address the nation at 11 a.m.