Schiff: Nope, Not Going to Revise Our Memo 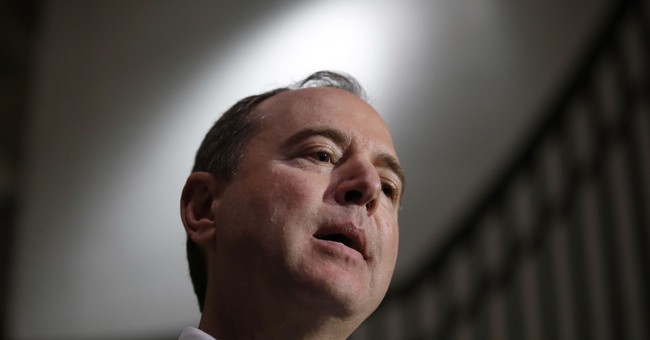 Rep. Adam Schiff (D-CA), the ranking member on the House Intelligence Committee, is not going to fully heed the White House's request to revise the Democratic rebuttal to the FISA memo.

That four-page memo, authored by Chairman Devin Nunes (R-CA), detailed how the FBI violated FISA when seeking warrants to spy on Trump campaign members. They reportedly used an unsubstantiated dossier tying then-candidate Trump to the Kremlin. President Trump said the Republican document vindicated him from claims he colluded with Russia to win the 2016 election. Democrats, however, attempted to release their 10-page rebuttal, insisting it included context the Republicans omitted. But, Trump blocked it Friday, citing national security concerns. If they revise and redact it, he'll reconsider, White House counsel Don McGahn said at the time.

Schiff said at least one of those things is not going to happen.

I asked Schiff if FBI wants significant changes to his memo. He says: "We're not going to make any revisions to it. The only question is what redactions will be made, and obviously we'd like to keep those to a minimum." https://t.co/NVHlpcyr9g

Still, he is "confident" that he and the White House can reach a compromise and declassify the document.

The administration, however, does not have much incentive to work with Schiff. Last week, the Democrat accused Trump of intentionally "putting the government on trial" because he has something to hide. The White House's treatment of the intelligence community, he added, exposes their "sense of panic."