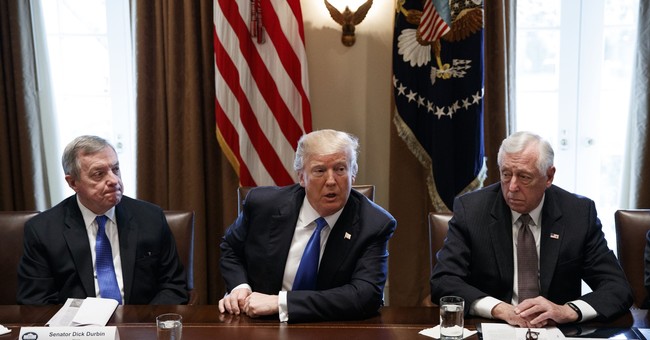 President Trump held a bipartisan discussion with top senators at the White House Tuesday to discuss how they can usher in immigration reform. The cameras were rolling the whole time.

In an effort to seize the opportunity of being right across the table from the president while he seemed to be in a conciliatory, impressionable mood, Feinstein suggested kicking off immigration reform by voting on a "clean DACA bill."

The president was intrigued.

"We're going to do DACA, and then we can start immediately on the phase two, which would be comprehensive," he said. "I think a lot of people would like to see that. But we need to do DACA first."

A concerned GOP Majority Leader Kevin McCarthy, who was sitting two seats away from Trump, quickly interjected to inform the president that Feinstein's plan was not as optimistic as it sounded. It would not, for instance, include the additional border security for which the administration has long been clamoring.

Conservatives were just as peeved by Trump's declaration that the immigration bill that reaches his desk needs to be a "bill of love."

Liberal outlets, meanwhile, commended Feinstein for trying to pull one over on the president and excoriated Trump for not knowing his own policy positions. Two weeks ago, he insisted that he would not sign any bill on DACA until he got his border wall funding.

"Why, it's almost as if he has no idea what he's talking about," GQ wrote.

Trump may have nearly conceded to a Democratic plan, but he did also double down on a border wall. He said he could get it done for less than the $18 billion initially proposed.