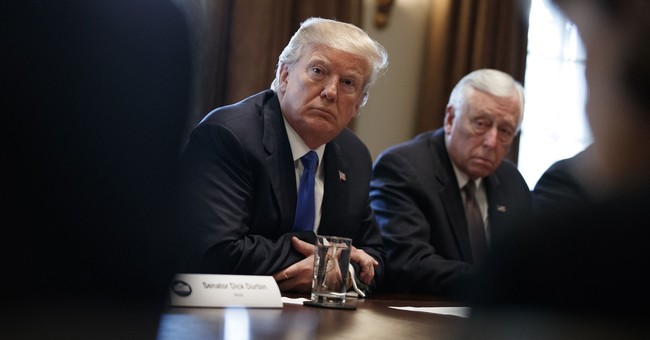 On Tuesday, the American people were gifted with a glimpse into a bipartisan discussion on Capitol Hill. Yes, you read that right.

President Trump hosted a meeting on immigration reform with top lawmakers on both sides of the aisle - and cameras were allowed in. Trump was seated between two Democratic senators - Dick Durbin (D-IL) and Steny Hoyer (D-MD). Trump gave each senator a chance to speak their mind on DACA, border security and other pressing issues that must be resolved in order to pass immigration reform.

Pressed by one Democratic senator, Trump defended the need to build a border wall. Sen. Mazie Hirono (D-HI) asked him if he still planned to demand $18 billion for the wall. The president responded he could do it for less.

.@POTUS: "We need a certain portion of that border to have the wall. If you don't have it, you can never have security." pic.twitter.com/68avQ0RDTc

Trump also noted that thanks to his policies, fewer people have been trying to cross the U.S.-Mexico border illegally.

At one point, Sen. Dianne Feinstein (D-CA) asked if he would be open to voting on a "clean" DACA bill now, with a commitment that it will move to comprehensive immigration reform. The president said he would "like it," and thought many others would as well. As a side note, some conservatives are balking at this exchange, suggesting that Trump was caving to the Democrats.

Trump commended the politicians in the room for having "big hearts" in wanting to get immigration reform passed.

"There should be no reason not for us to get this done," he said.

If a bill reaches his desk, the president said he won't nitpick. He'll be signing it.