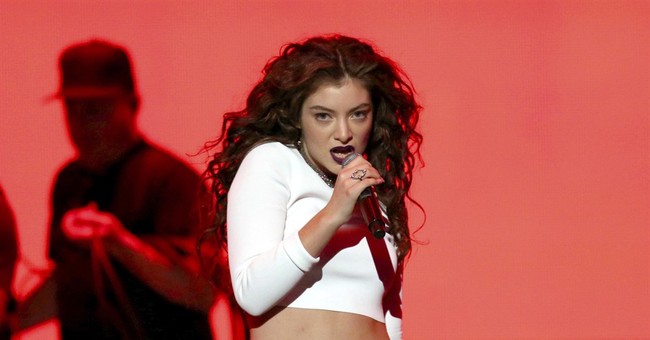 Grammy-winning singer Lorde has succumbed to peer pressure and canceled a concert in Israel as a way to cater to the boycott, divestment and sanctions (BDS) movement, a campaign created as a way to punish Israel for its "oppression" of Palestinians, according to its founders. The movement is so extreme that even liberal governors have condemned it. In June 2016, New York Gov. Andrew Cuomo signed an executive order deeming that state agencies can strip funding from any company that is privy to the BDS movement.

Still, Jewish activist Justine Sachs and Palestinian activist Nadia Abu-Shanab wanted to get Lorde's attention and penned a letter to the artist urging her to comply with the BDS campaign. In their letter, they condemned President Trump's decision to move the U.S. embassy in Israel from Tel Aviv to Jerusalem, arguing it was a slap in the face to Palestinians. The two young women also accused Israel of operating on a system of apartheid.

Today, millions of people stand opposed to the Israeli government’s policies of oppression, ethnic cleansing, human rights violations, occupation and apartheid. As part of this struggle, we believe that an economic, intellectual and artistic boycott is an effective way of speaking out against these crimes. This worked very effectively against apartheid in South Africa, and we hope it can work again.

Having seen the letter, Lorde complied with their request.

"Noted!" she wrote on Twitter. "Been speaking w many people about this and considering all options. Thank u for educating me I am learning all the time too."

Recommended
Dr. Anthony Fauci May Be More Conniving Than We Thought
Rebecca Downs

Lorde cancels her concert in Israel, the only democracy in the Middle East, over human rights concerns. But she goes for a gig to Russia, a brutal dictatorship complicit in the mass murder in Syria.