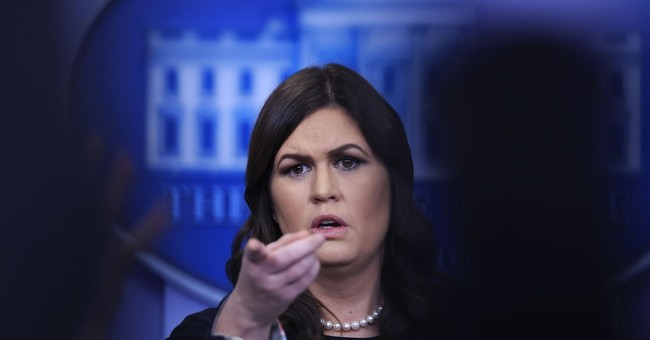 White House Press Secretary Sarah Huckabee Sanders regretted this week that Democrats didn't make an effort to participate in tax reform. It seems to be a pattern this year. You remember the infamous photoshoot of President Trump sitting between two empty chairs last month after top Democrats Chuck Schumer and Nancy Pelosi bowed out of the meeting. They eventually did meet, one day before the government shutdown deadline.

Fed up with the partisan politics, Sanders said on Fox News that Democrats should have been "begging" to work with them on tax reform for the benefit of the American people.

The Hill misquoted her. In their original tweet, the outlet suggested that Sanders had "begged" Democrats to help them on the bill. They later updated with the correct language.

Huckabee Sanders: Dems should have been "begging" to participate in tax reform https://t.co/eS70BwDSn1 pic.twitter.com/pYu9EijYv3

"That’s something that Democrats shouldn’t need to be begged to be a part of," Sanders said on "Fox and Friends." "They should’ve been begging and banging down the door of the building behind me to be part of this process and to be part of helping more Americans be more successful."

President Trump would have been "happy" to take their calls, she said, adding that he invited Democrats to the White House on several occasions.

Rep. Ted Lieu (D-CA) jumped on the initial, inaccurate headline. In a (now-deleted) tweet, Lieu wrote, "Dear @PressSec: You don't serve in Congress. I do. And I can say with absolute certainty that you are lying."

Other Democrats called Sanders out for lying, insisting they never received one call or email from the White House.

Sanders responded to Lieu with a fact check.

Dear @tedlieu - I don’t serve in Congress, but I can read. If you had read the story, not an incorrect tweet, you would see that what I said was Dems should be begging to help Americans keep more of their money. You should spend less time tweeting, more time doing your job. https://t.co/jI3W2a0xaQ

The Republican tax reform plan has passed both chambers, but a revote will take place Wednesday in the House after Democrats declared two provisions to be in violation of budget rules.