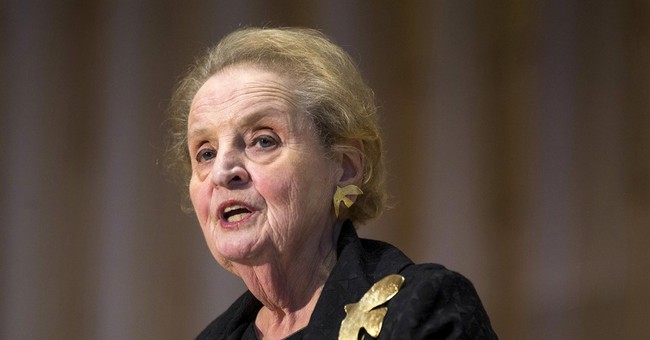 Former Secretary of State Madeleine Albright, who served from 1997 to 2001 under President Bill Clinton, is concerned by what she's seeing at her old stomping grounds. The vacancies at the State Department, she says, is akin to a "national security emergency."

It "saddens" her to criticize one of her successors, but she did anyway.

"Sadly, the official who should be highlighting the State Department’s vital role has not done so,"  Albright wrote about Secretary of State Rex Tillerson in an op-ed for The Washington Post.

On Tuesday, Secretary of State Rex Tillerson denied that the department is being hollowed out even while defending the president’s plan for a massive reduction in his agency’s budget. Meanwhile, for reasons that make sense only to him, Tillerson has delayed filling many of the most important diplomatic posts in Washington and overseas. All too often, foreign officials have sought to engage the department at a high level only to find no one with whom they can speak.

As for President Trump, she doubts he is going to address the situation either.

"President Trump is aware of the situation and has made clear that he doesn’t care," Albright notes, before quoting him as once saying, "I'm the only one that matters."

With Tillerson and Trump leaving so many posts open in the department, the U.S.'s diplomatic readiness is badly damaged, she claims.

Albright is not a new critic of the Trump White House. In recent months, she has condemned the 45th president's rhetoric as being both inappropriate and un-American.