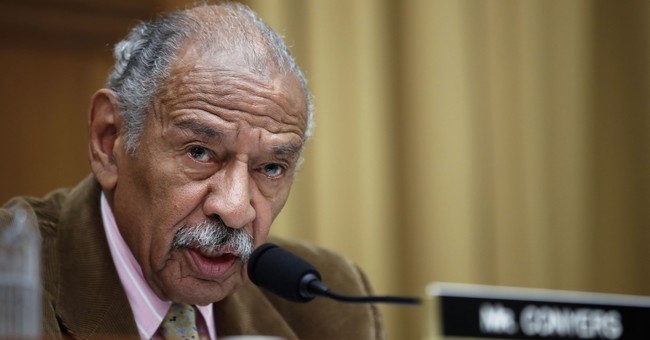 "We reach this conclusion with an incredible amount of disappointment," the editors at the Detroit Free Press regrettably write.

Before the accusations against Rep. John Conyers (D-MI) surfaced this week, the Democrat was known as a hero to the party, lauded for his civil rights activism which dates back to the 1950s.

Yet, there's no getting past the new scandal. Documents reveals that Conyers paid a $27,000 settlement to a former staffer who says he made unwanted sexual advances to her. A second woman accused him of sexual misconduct, as revealed by BuzzFeed News Tuesday.

It is, the Detroit Press writes, a "public betrayal."

John Conyers Jr. must go — after 53 years in Congress, after a stellar career of fighting for equality, after contributing so much to southeast Michigan and the nation.

It’s a tragic end to his public career. But it’s the appropriate consequence for the stunning subterfuge his office has indulged here, and a needed warning to other members of Congress that this can never be tolerated.

Conyers denies any inappropriate behavior, yet the editors note that even if he's innocent, "there’s no defense for having used dollars from his congressional office to 'settle' a claim."

Conyers is not the only member of Congress facing sexual harassment allegations. Sen. Al Franken (D-MN) is accused of kissing and groping a radio host at a 2006 USO tour. The pictures are pretty damning and convinced the House Ethics Committee to launch an investigation into the incident.

Rep. Jackie Speier (D-CA) claims there are others. Both Speier and Rep. Barbara Comstock (R-VA) shared horror stories at a House hearing on preventing sexual harassment earlier this month. Their bipartisan effort has convinced House leadership to mandate anti-harassment training and to try and streamline the process for victims to report incidents to the congressional Office of Compliance.

Meanwhile, Republican Alabama Senate candidate Roy Moore, with the help of his team, continues to push back against his own sexual harassment allegations. The scandal is undoubtedly hurting his image in these late stages of the campaign. The special election is scheduled for December 12.