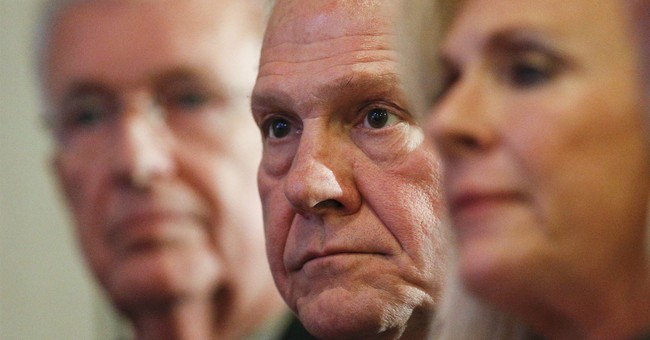 Republican Alabama Senate candidate Roy Moore faces several sexual harassment allegations a few weeks ahead of the special election. On Monday, the TODAY show aired an interview with one of his accusers, Leigh Corfman. In the interview, Corfman explained how Moore repeatedly took advantage of her when he was in his 30s and she was just a minor.

Moore’s associates responded to her story by presenting what they say is evidence to debunk her story at a press conference Tuesday.

Ben DuPre, Moore's former chief of staff, said the candidate is nothing but “honorable and trustworthy.” He “never heard a single complaint about uncomfortable behavior” from his associates.

“The man is above reproach,” DuPre said. “We don’t believe a word of these lies against him.”

The Washington Post, the Republican establishment and the Democrats are engaged in a “three-front war” to destroy Moore’s character, he continued. Why, for instance, is the media finding reasons to vindicate Bill Clinton, but “quick to pass judgment” on a conservative like Moore?

“We’re here today to do the job for the press,” he offered.

DuPre said he and his team did a little research to find several holes in Corfman’s story in her “softball interview” with the TODAY show.

Not only did Corfman tell her story in “vague terms,” but she was not asked to substantiate her claims, he noted.

For instance, Corfman claimed in the interview that her life “spiraled out of control” after meeting Moore. Yet, DuPre said he had evidence revealing that she already had disciplinary problems from a very young age, because court documents showed that her parents switched custody from the mother to her father, who was “better equipped” to deal with her emotional state.

DuPre also pushed back at Corfman’s claims that Moore often called her in her bedroom. Her mom even said there was no phone in her bedroom, he pointed out.

Finally, DuPre rejected Corfman’s claim that Moore would sometimes pick her up from the corner of her house. According to public records, they found that Corfman’s supposed pick up place was “a mile away” from her mother’s house, making it another “improbable fact."

Two other Moore associates spoke to the press to try and upend the allegations against him. One thing they had in common was to lecture the press “to print and tell the truth.”