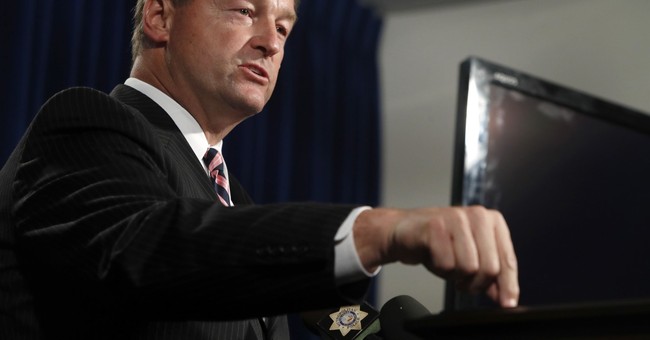 Several Republican senators have voiced their disgust over allegations that Alabama Senate candidate Roy Moore sexually abused a minor when he was in his 30s. Moore has denied the reports (he's even suing the Washington Post), and insisted he's staying put in the special election race. Yet, many of his endorsements have disappeared.

I am pulling my endorsement and support for Roy Moore for U.S. Senate.

Sen. Mike Lee (R-UT) not only withdrew his support, but he asked Moore's campaign to remove his face from their ads.

"If these allegations are true," Lee said, "Roy Moore needs to step down."

Sen. Ted Cruz (R-TX) agreed with his colleague, noting the following in a statement on Thursday.

"These are serious and troubling allegations," Cruz said. "If they are true, Judge Moore should immediately withdraw."

Sen. Dean Heller (R-NV) has not (yet) joined the flurry of senators distancing themselves from Moore. In fact, his silence gained the attention of the progressive American Bridge 21st Century Super PAC, which highlights it in a new ad.

"What does Dean Heller have to say about his party's nominee?" the ad asks. "Call Dean Heller. Tell him now is no time to stay silent."

Heller first faced heat for his silence on Moore in September, when he told the media he had nothing to offer on the candidate because he hadn't followed the Alabama race all that closely. Nevada Democrats didn't quite believe him.

“Dean Heller is clearly a very bad liar, and Nevadans deserve to know whether Heller wants this right-wing ideologue as a colleague in the Senate next year. Most Nevadans would recoil at Roy Moore’s repulsive, racist and homophobic views, but Senator Heller is trying to fake ignorance instead of standing up against this dangerously extreme politician in his own party.”

Still, as mentioned above there are plenty of GOP senators who are speaking out against Moore and the allegations around him.