WaPo Writer: Why Were There No Calls for Gun Control at the CMA Awards? 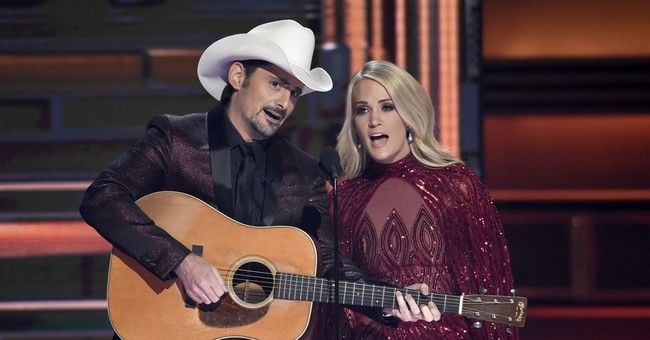 Carrie Underwood delivered a beautiful, tear-filled tribute to the victims who were slain at last month's mass shooting in Las Vegas during her gig co-hosting the Country Music Awards with Brad Paisley Wednesday night. During her emotional performance of the hymn "Softly and Tenderly," the victims' faces, 58 in all, were shown on the screen.

Moving tribute from @carrieunderwood and @CountryMusic Association to those lost in Las Vegas on October 1st. Rest in peace...#CMAawards pic.twitter.com/FwhautLfVe

She and Paisley also gave a tribute to the Vegas victims, who were attending a country music festival when shots began raining down on them from the Mandalay Bay hotel, at the very top of the show, before proceeding with their monologue.

That's all well and good, but the show could have used a bit more gun control rhetoric, according to Washington Post contributing music writer Chris Richards. Why didn't the awards show use the opportunity to call for gun control, he wondered in his Friday op-ed. He was especially "disheartened" by Brad Paisley, who he said was "acquiescing to Nashville’s disengagement reflex" and encouraging fans to ignore the violence - at least that's how he interpreted the song "Heaven South."

And sure, nobody expected the CMAs to transform into a three-hour town hall discussion about the Second Amendment. But did anyone expect such monolithic quiet after such a catastrophic event? Apparently, the ghost of the Dixie Chicks’ career still haunts this town in terrifying ways. (In case you forgot, the colossally popular country trio spoke out against President George W. Bush at a concert in 2003 and were instantly boycotted by radio stations across the country, sending the entirety of mainstream country into a state of political paralysis that has lasted 14 years and counting.)

Now, a style of music that used to proudly address the real-life struggles of real-life Americans won’t go near the issue that everyone in our harried republic is struggling with. After last month’s massacre in Las Vegas, 26 more people were killed in a shooting inside a church in Texas — the setting of countless country songs. Yet, instead of singing about life in America, today’s country stars are singing about an apolitical no-place that doesn’t actually exist. I guess it’s called Heaven South, and apparently, you protect it by circling the wagons.

Perhaps a music awards show isn't the best place to promote a political agenda. Other awards ceremonies have tried to offer their two cents on policy matters instead of sticking to their art, and are quickly criticized for it. Leave the politics for Washington, D.C.

Richards will be comforted to know that Democrats on Capitol Hill are pushing new gun control legislation. Sen. Dianne Feinstein (CA), along with dozens of her colleagues, introduced an assault weapons ban this week.