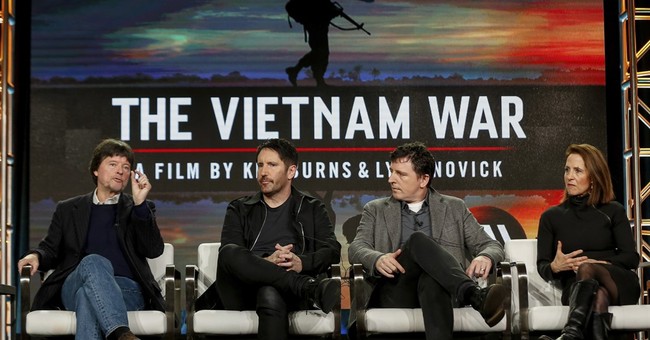 Ken Burns's and Lynn Novick's popular The Vietnam War documentary has received plenty of praise since the 10-part series started airing in September. Yet, some authors, historians and veterans groups are not joining the chorus.

The Intercept's Nick Turse charges that Burns's documentary largely ignores the staggering toll the war had on innocent civilians.

Other critics like author Jeffrey P. Kimball say the producers have certainly provided some compelling TV, but "their treatment of diplomatic, political, international, and other important facets of the war leave something to be desired."

In particular, Burns and Novick mischaracterize Nixon’s and Ford’s policy goals, Nixon’s and Henry Kissinger’s diplomatic and military strategies, the fundamental issues at stake in the Paris negotiations, the purposes and consequences of the 1972 “Christmas bombings,” and the causes of the fall of South Vietnam in 1975. In addition, they omit the baneful political legacy that Nixon fostered by blaming others for the US defeat in Vietnam.

Vietnam Veterans for Factual History couldn't agree more. In a concerned letter ahead of Veteran's Day, the group asks Burns, PBS and the Bank of America (which funds the documentary) to quickly make some corrections and clarifications. They list four specific grievances with the series.

Many in the Vietnam veteran community were deeply offended by the series. It correctly sees that war as the origin of the current cultural polarization in American society and the intention was for the film to help bridge that divide. Unfortunately, its significant factual inaccuracies, omissions, and distortions deliver a message that is very negatively slanted against both the nation of South Viet Nam and American involvement there that exacerbates those divisions.

2. It minimizes Ho Chi Minh's life-long dedication to ruthless Leninism, his years of Soviet training and professional work as a covert Communist subversive, and the mass atrocities of his supporters in North and South Vietnam before, during, and after the Second Indochina War. You also fail to acknowledge U.S. treaty obligations to assist Southeast Asian governments fighting Communist subversion, terrorism, and invasion.

3. It ignores the actions of leftist U.S. politicians in cutting off funding for vital military supplies for the South Vietnamese Army and prohibiting U.S. enforcement of the Paris Accords of 1973 with combat air power from bases outside of Vietnam, as our President promised the South Vietnamese government; and as our Air Force successfully did during the 1972 conventional large scale invasion by the North Vietnamese Army.

4. Lastly, there is inadequate discussion of the results of the communist victory, the tens of thousands of executions, the million-plus sent to concentration camps, the curtailing of all civil liberties, and oppression that led to the first ever mass exodus of Vietnamese from their homeland.

"In the interests of truly open civil discourse on this part of our history," the veterans group asks that the producers sit down to discuss "possible remedies" to offer a more balanced perspective.