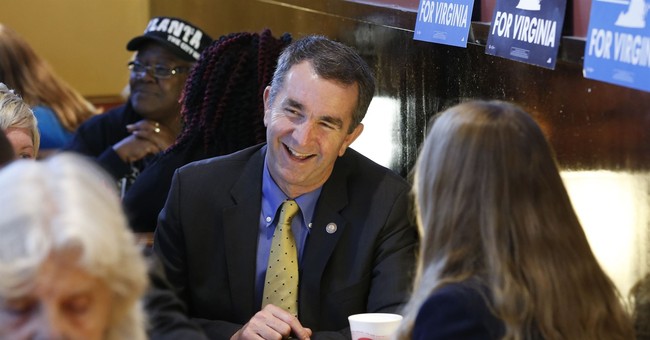 Virginia Lt. Gov. Ralph Northam is having a rocky last leg of the gubernatorial race. His campaign's controversial advertising, and those of his allies, are largely to blame for the bad press. One particular TV spot from the Latino Victory Fund, which painted Republicans as murderous truck drivers seeking to run over minority children, was one of the most blasphemous, disgraceful ads we've ever seen. The ad was taken down after the terror attack in New York City this week, in which the suspect killed eight people with a truck.

Northam denies that his campaign approved that particular ad, but there are plenty of other controversies to go around.

Last month, the campaign decided to remove Justin Fairfax, an African-American candidate for lieutenant governor, from campaign literature in northern Virginia. Northam was accused of "subtle racism" because of the omission. The candidate didn't apologize, noting that Fairfax was removed from the literature because a labor union had declined to endorse him and the dispute was between the two of them.

That last decision may have come back to bite the Democrats. Former Virginia Gov. Doug Wilder, who is the last African-American to have been elected to a state-wide office in the state since 1989, joined Chuck Todd for a conversation about the race, and it was a perfect opportunity to announce his support for the current Democratic candidate.

As NBC notes, he declined.

With the tightening race less than a week away, former Gov. Wilder joined Chuck Todd in the latest episode of 1947: The Meet the Press Podcast for a wide-ranging discussion about the state of Virginia politics. He continued to decline to endorse either candidate for governor this year, as he did in 2009 when he withheld his endorsement from Sen. R. Creigh Deeds, (D-Bath).

The outlet wonders if the Justin Fairfax controversy had something to do with it, considering how much praise Wilder heaped on him in the interview.

But Wilder did conspicuously heap praise on Justin Fairfax, the Democratic candidate for lieutenant governor.

“You can tell from the way I’m talking that I feel very good about Justin Fairfax. I think that he’s someone who’s highly qualified,” he said. “You don’t elect people like him, then who are you going to have?”

In addition to these campaign controversies and lack of Democratic unity, the sanctuary city issue has helped Republican Ed Gillespie narrow (and, according to some polls, erase) Northam's lead.