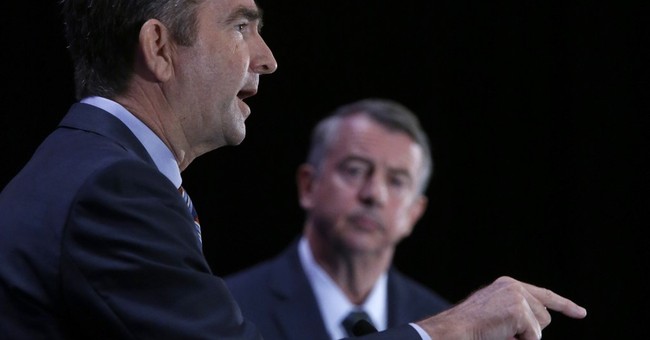 UPDATE: Northam was asked about the controversy on MSNBC Thursday and did not apologize for his campaign's decision to leave Fairfax off of some campaign literature.

"That's between the union and him," Northam said.

Virginia Lt. Gov. Ralph Northam, the Democrats' gubernatorial candidate this year, is being accused of "subtle racism" because of a recent omission his campaign made in their brochures. It appears that the African-American candidate for lieutenant governor, Justin Fairfax, has mysteriously disappeared from 1,000 pieces of literature that have been distributed in Northern Virginia.

This is a pretty big deal now that it’s been publicized, given how important black turnout is for Northam https://t.co/gB3w35lRmE

The decision to remove Fairfax from the fliers apparently came at the request of the Laborers’ International Union of North America, which did not endorse him because of his opposition to infrastructure projects that would provide middle-class jobs.

Fairfax said the campaign made a "mistake," before his campaign released a fuller statement.

“This is a strong ticket and one that is working well together,” it said. “One piece of literature does not change that. Voters from across the Commonwealth have responded enthusiastically to Justin’s candidacy and the entire Democratic ticket. They are excited about our plan to offer more educational opportunity, economic growth, and more access to health care and they will reject the divisive and cynical politics of our opponents. That’s why Justin’s been endorsed by organizations like the VA AFL-CIO, Virginia Education Association and Planned Parenthood Advocates of Virginia.”

Yet, the damage has been done.

“It reeks of subtle racism, if not a tone deafness about how we are going to win in November,” said Quentin James, the founder of Collective PAC that supports black candidates, including Fairfax. “Leaving Justin Fairfax off...even if it’s only for a small universe of union members, still sends the wrong message.”

Northam is currently running neck-and-neck with his Republican opponent Ed Gillespie, who was endorsed on Twitter by President Trump.