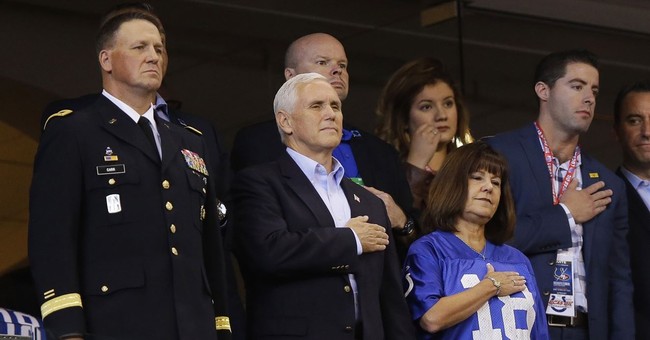 Football players knelt on the field during the national anthem before Sunday's game between the Indianapolis Colts and the San Francisco 49ers. The kneeling is by now an unfortunate norm in the ratings starved NFL games, but what made the protest even more pronounced was the fact that Vice President Mike Pence was in attendance.

On Twitter, Pence explained that he stormed out of the game because he "will not dignify any event that disrespects our soldiers, our Flag, or our National Anthem." President Trump, who said he asked Pence to walk out, tweeted that he was "proud" of his VP.

The media believe the vice president had a different motive. It was, they say, all a manufactured stunt. CNN's Chris Cillizza, for example, explained how pool reporters were instructed to remain in the media van outside the Colts game instead of enter the stadium because Pence would probably not be staying long. Trump knew exactly what he was doing, Cillizza muses.

The Pence protest is a perfect example of Trump as the puppet master of a giant reality show he's producing. Trump knew that Pence was headed to the Colts game. (The vice president's office said the trip had long been scheduled.) He believes strongly that the fight he picked with NFL players over whether or not to stand during the National Anthem is a good one for him -- and his political base. And so he directed Pence to stage the walkout and make sure everyone knew about it.

Other media outlets used the word "stunt" to describe Pence's actions, calling him a "useless prop."

To depict Pence's walkout as such is "offensive" and "egregious," White House Counsel Kellyanne Conway responded.

Former White House Press Secretary Ari Fleischer had to agree. He too argued that the media is targeting the wrong guy.

Bias in action: Pence walking out is a "stunt". Players taking a knee is genuine. The MSM really doesn't get it.

They really don't. Recent polling suggests that most Americans would have walked out with him.