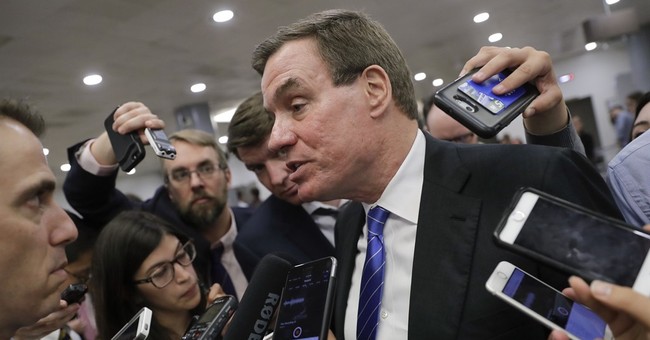 Sen. Mark Warner (D-VA) has supposedly learned his lesson from Democrats’ failed health care experiment. Instead of passing Obamacare without one single Republican vote, they should have done a better job reaching across the aisle, he reflected on CNBC.

The GOP did not learn from their mistake, he warned, arguing they are now on the verge of doing the same exact thing on tax reform.

Everybody on Capitol Hill knows his phone number, Warner said. Why has no Republican called him to work together on tax policy?

"If there's one thing we've seen, when either political party tries to do big things only with one side of the aisle, you generally screw up," said Warner, a member of the Senate Finance and Budget committees.

"We saw that perhaps with Democrats when we passed Obamacare [and] Dodd-Frank," he said in a "Squawk Box" interview. "We clearly saw it this year when Republicans tried to do health care."

Warner may not have yet received a call. Yet, President Trump showed us recently that he is not beyond reaching out to Democrats to move an agenda forward. He went ahead and struck a deal with Chuck Schumer and Nancy Pelosi without waiting for Republicans.

Well, good on Warner for acknowledging his party’s mistake and his (current) willingness to work with his Republican colleagues. He also proved he’s capable of bipartisanship with his bromance-like press conference with his fellow Senate Intelligence Committee member Richard Burr back in May. Their handshakes and kind words for one another over the Russian collusion probe were a welcome scene after the all-out brawl between their House counterparts Adam Schiff and Devin Nunes.