Joy Reid: Did Trump Forget He's Married to an Immigrant? 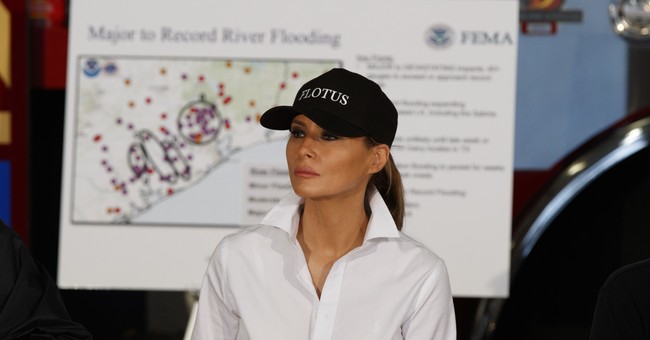 Amid reports that President Trump is on the brink of ending the Deferred Action for Childhood Arrivals program, which would protect illegal immigrants who came here as minors from immediate deportation, MSNBC's Joy-Ann Reid is reminding him who he's married to, as if that upends his argument.

“And let’s not forget that the president is married to an immigrant,” she said Thursday afternoon on her network. “Which is the ultimate irony.”

Yes, the First Lady is an immigrant. In 1996, she was modeling in Slovenia when she decided to obtain a work visa and come to America. Four of those visas later, she eventually obtained a green card and became a lawful permanent resident in 2001, the LA Times explains.

Mrs. Trump has defended her modeling here in the States during the 1990s, insisting she did not spend one day working illegally.

"I followed the law the way it’s supposed to be,” she said. “I never thought to stay here without papers. I had a visa. I traveled every few months back to the country to Slovenia, to stamp the visa.”

Still, media pundits and Trump's liberal critics are using his wife's travel history as proof he is a hypocrite. Lifting the cloud of protection President Obama gave DREAMers during his administration is proof that Trump is putting the “moral conscience" of the country "at stake,” journalist Jose Antonio Vargas said on Reid's show. For a personal anecdote, Vargas read a letter he had received from a DACA recipient who arrived in the States at age three and worked his way through college. He summed up the sentiments of any "undocumented immigrant" benefiting from the program: "The lack of a document should not define me."

Despite Fox News's initial report, Trump has not made a final decision on DACA, White House officials said at Thursday's press briefing. Trump has had mixed feelings about the program this past year. While during the campaign he slammed DACA as "amnesty," in April he told DREAMers they can "rest easy." The president told the press he will be announcing his decision this weekend.