Feinstein, After Getting Booed: Here's a Reminder I Don't Like Trump 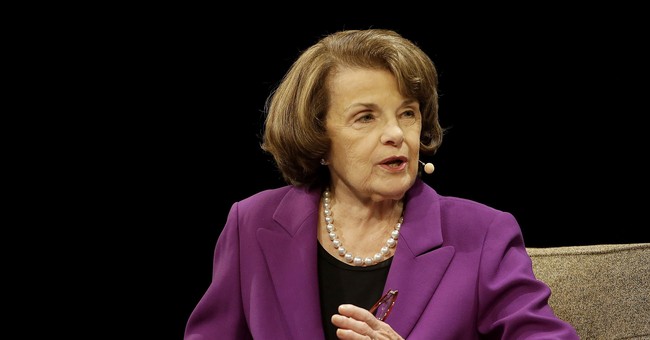 Sen. Dianne Feinstein (D-CA) made the mistake this week of rooting for the president instead of tearing him down. When asked about the movement to impeach President Trump at a Commonwealth Club of California event at the Herbst Theater in San Francisco Tuesday, she declined to participate and instead chose to be "patient" with the 7-month-old presidency. He "can learn and change," and he could “be a good president,” she hoped.

As you can see, it was hardly a compliment. Yet, it was enough to put her on the progressive verbal hit list.  She was booed when she initially made the remark. Then, California Senate President Pro Tem Kevin de León called her out for being "complicit" in Trump's discriminatory agenda.

Hearing all the backlash, the LA Times wonders if Feinstein had "grown out of touch with her constituents."

She didn't quite say she was sorry, but Feinstein did issue the following statement Wednesday reminding Democrats she's no fan of 45.

“I’ve been strongly critical of President Trump when I disagree on policy and with his behavior,” she said, noting she was “appalled” by Trump’s response to the Charlottesville violence and the pardon of former Sheriff Joe Arpaio.

And she sought to put her statement from the day before in context: “The duty of the American president is to bring people together, not cater to one segment of a political base; to solve problems, not campaign constantly. While I’m under no illusion that it’s likely to happen and will continue to oppose his policies, I want President Trump to change for the good of the country.”

Feinstein wasn't giving Trump a hearty endorsement for the 2020 election. She simply said she wants him to learn and grow.

A couple of A-list celebrities said more of the same earlier this year. Tom Hanks, when asked about Trump shortly after his election victory, refused to go in the gutter.

"I hope the president-elect does such a great job that I vote for his re-election in four years," he said in November.

Actress Nicole Kidman too hoped she would see the country come together and support the president, she told the BBC in January.

Why are we criticizing those who just want to see this country succeed?