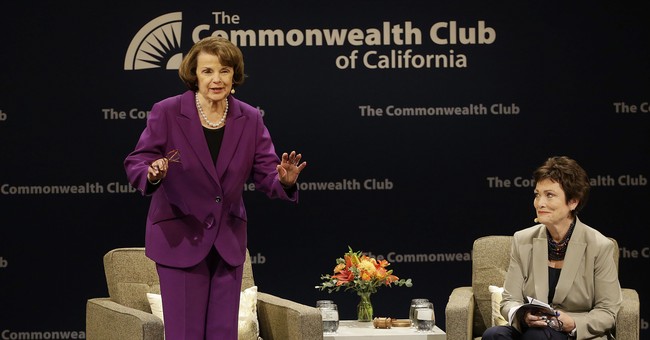 Rather than echoing calls to impeach President Trump like some of her Democratic colleagues, Sen. Dianne Feinstein told a crowd that with a little bit of change, Trump has the potential to “be a good president.”

According to the San Francisco Chronicle, the California Democrat made the remarks during an hour-long conversation with former East Bay Rep. Ellen Tauscher during a Commonwealth Club of California event at the Herbst Theater in San Francisco.

The paper described Feinstein, who served as mayor of San Francisco for a decade, as “wildly popular” but said even she “can get into trouble” for saying anything nice about the president.

“The question is whether he can learn and change,” Feinstein told the crowd. “If so, I believe he can be a good president.”

She also warned that the audience better expect to deal with Trump for all four years of his term.

The comments did not sit well with the crowd.

That sort of talk is never heard in Democratic circles, where California Congress members already are talking about what they see as the need to impeach Trump or remove him from office via the 25th Amendment.

The crowd reacted with stunned silence, broken only with scattered “No’s” and a few hisses and some nervous laughter. (San Francisco Chronicle)

Even with that reaction, Feinstein doubled down, saying, “We’ll have to see if he can forget himself enough and have the type of empathy and direction the country needs.”

If he doesn’t, “there are things that can be done,” she added.

Feinstein has certainly dished out her fair share of criticism toward the president on everything from his recent pardon of Sheriff Joe Arpaio to his transgender military ban.

Still, she reminded the audience that it’s not wise to be in attack mode all the time.

“I have to work with people and a punch in the nose is not going to do it,” she said.