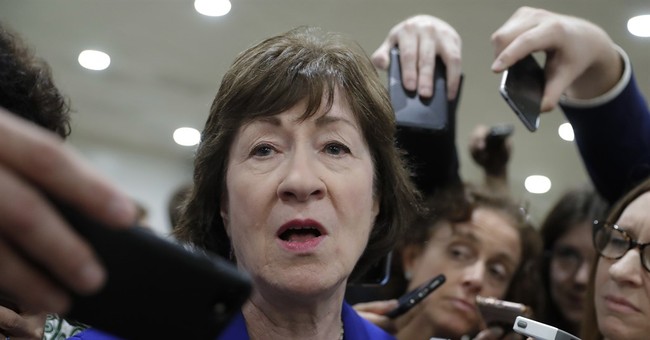 The New York Times and CNN aren't the only ones with questions about the meeting Donald Trump, Jr. had with Russian lawyer Natalia Veselnitskaya last year during the presidential campaign. Republican Sen. Susan Collins (ME) thinks the meeting warrants a Senate Intelligence Committee hearing.

“Our intelligence committee needs to interview him and others who attended the meeting,” she told the press Monday.

Trump Jr. has released two statements related to the meeting following reports that he was seeking damaging information about Democratic presidential nominee Hillary Clinton. In the statements, he explained that he did not know who Veselnitskaya was when their meeting was scheduled. Furthermore, he said, their discussion was not campaign related - it was about an adoption program.

JUST IN: Donald Trump Jr. responds to reports that he met with Kremlin-linked lawyer during campaign pic.twitter.com/5mqRX38Wio

White House Adviser Kellyanne Conway jumped in to defend him too, going back and forth with CNN's Chris Cuomo. His meeting with Veselnitskaya was not about "opposition research," she said, noting humorously that if Trump Jr. really wanted to find incriminating information on Hillary Clinton, he needn't have gone to all that trouble.

Trump Jr. is still claiming innocence. After hearing of Collins's request, he said he'd be "happy" to testify before the Senate.