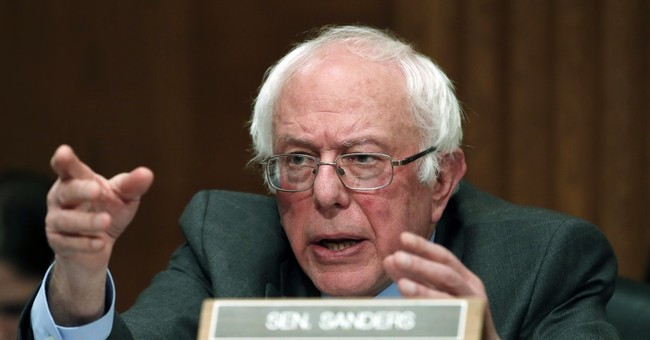 Sen. Bernie Sanders (I-VT) received a lot of flak - from both conservatives and progressives - for bullying one of President Trump's cabinet nominees over his Christian faith. Russell Vought, who is Trump's nominee for deputy director of the White House Office of Management and Budget, is disqualified from serving because of his beliefs, Sanders concluded at last week's confirmation hearing.

Vought had once written that Muslims "do not know God" and they "stand condemned." Sanders told Vought outright at the hearing that that opinion was "indefensible," "hateful" and "Islamophobic."

On Sunday, CNN's Jake Tapper wondered if Sanders still stands by the exchange.

“Senator, are you saying that someone is necessarily hateful and Islamophobic if they believe in their private life and express that in private life the only path to God is through Jesus Christ?” Tapper asked.

Sanders, who identifies as Jewish, said "absolutely not" and that every American has the right to hold whatever religious point of view they want. Yet, he stood by his conviction that Vought's "Islamophobia" makes him an "unacceptable" choice to serve in government.

“One of the great parts of our Constitution is to protect freedom of religion. You practice what religion you want. I do. Mr. Vought does. That’s what it’s about,” Sanders said. “But at a time when we are dealing with Islamophobia in this country, when you got 1.2 billion people who are Muslims around the world, to have a high-ranking member of the United States government essentially say, ‘Oh, Islam is a second-class religion’ — and this all took place, by the way, in terms of his defending the firing of a professor at Wheaton College because she showed solidarity with Muslims who are — were being attacked through an anti-Muslim effort.”

That is ironic, considering that the Religion News Service last year called Sanders, then a Democratic presidential candidate, “perhaps the least religious person in the 2016 race."

Sanders is not completely close-minded to the Christian faith, however, judging by his decision to speak at the evangelical-led Liberty University in 2015.